In association with Petplan

Part rabbit, part dog, with a cat’s tail, one eye bigger than the other and a fluffy coat full of rainbow spots and squiggles.

Squigglet is a girl. Well, if you ask Little Miss E, my nearly-eight-year-old daughter, that is. If you ask either of her brothers – Little Man O, my six-year-old middle child and Littlest Boy I, my three and a half year old youngest child – then Squigglet is a boy.

Squigglet likes to eat vegetables and fruit, but most of all little sweets. But only sweets that are safe for animals.

Squigglet’s favourite thing to do is playing with friends, running around in circles.

Squigglet sleeps anywhere but particularly likes being cuddled in bed by a human child.

Squigglet has been in our family for around a month now ever since Petplan challenged my children to draw their ideal pet – and then turned their creation into the cuddly toy you see here. 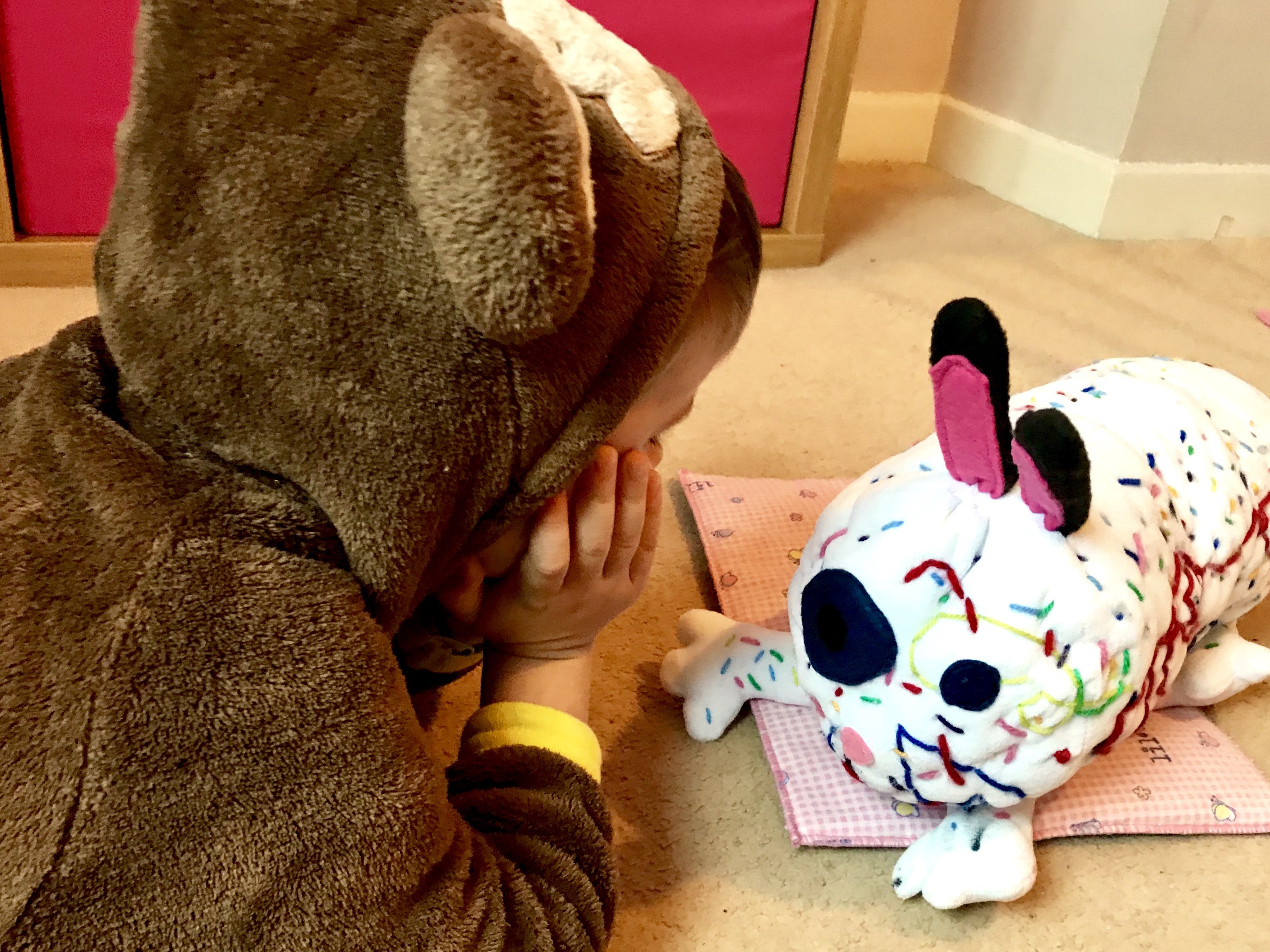 Best known for Petplan’s Pet Insurance the company are one of the few pet insurance providers to offer genuine ‘lifetime’ policies. But they also work with 1,200 animal re-homing charities throughout the UK  (more than any other pet insurance provider) to support the vital work they do. The Petplan Charitable Trust has so far raised more than £7 million towards a better, healthier world for animals.
So they know a lot about giving animals a safe and loving home – whether that’s real animals or ones you have created yourself!

Petplan told us the dream pet could be as creative and as fantastical as my children wanted it to it be. 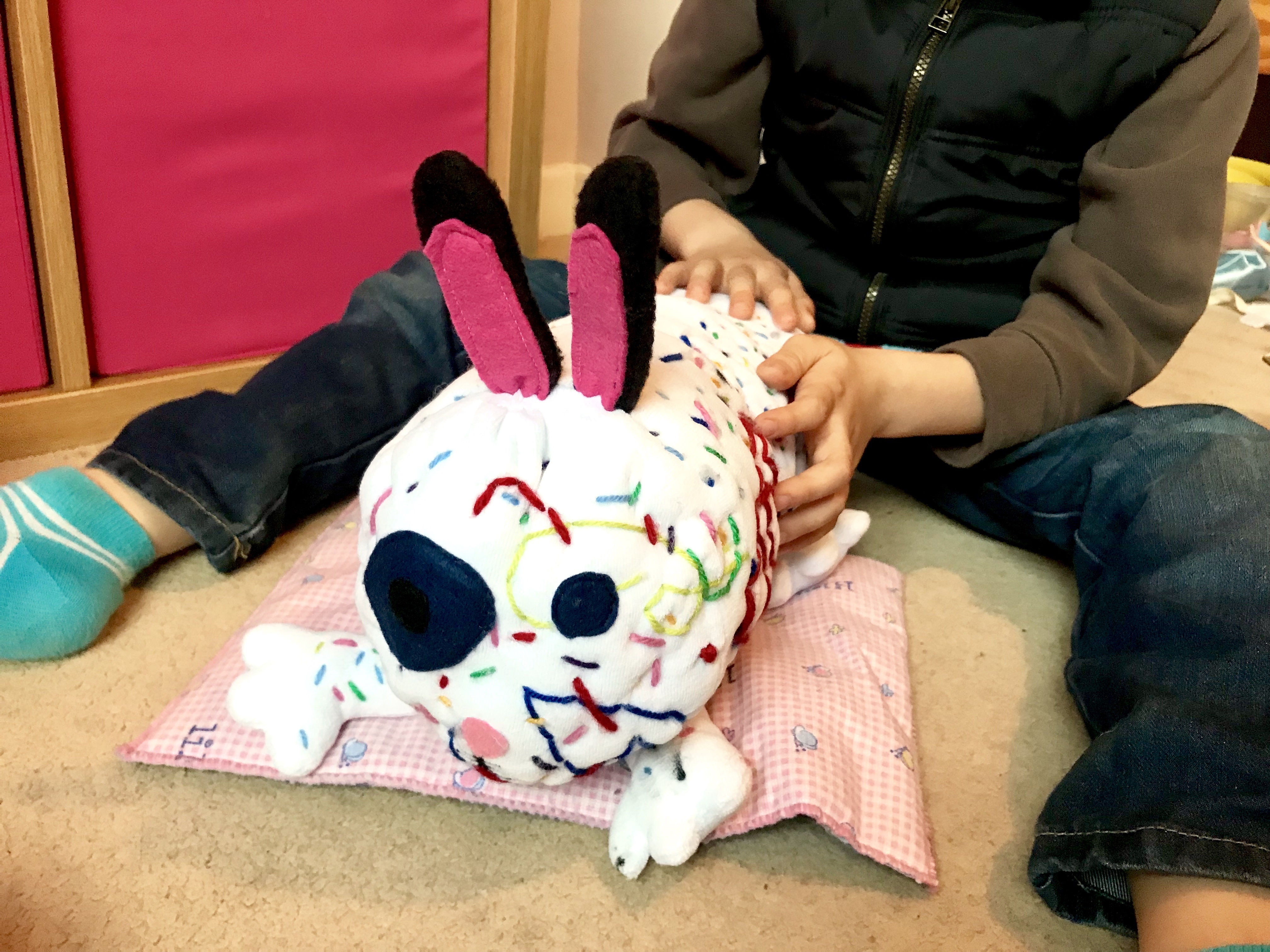 But it had to be one pet that they had all created together. It was a great challenge for the three of them, pooling together their ideas and coming up with something that reflected all of their thoughts on an ideal pet. 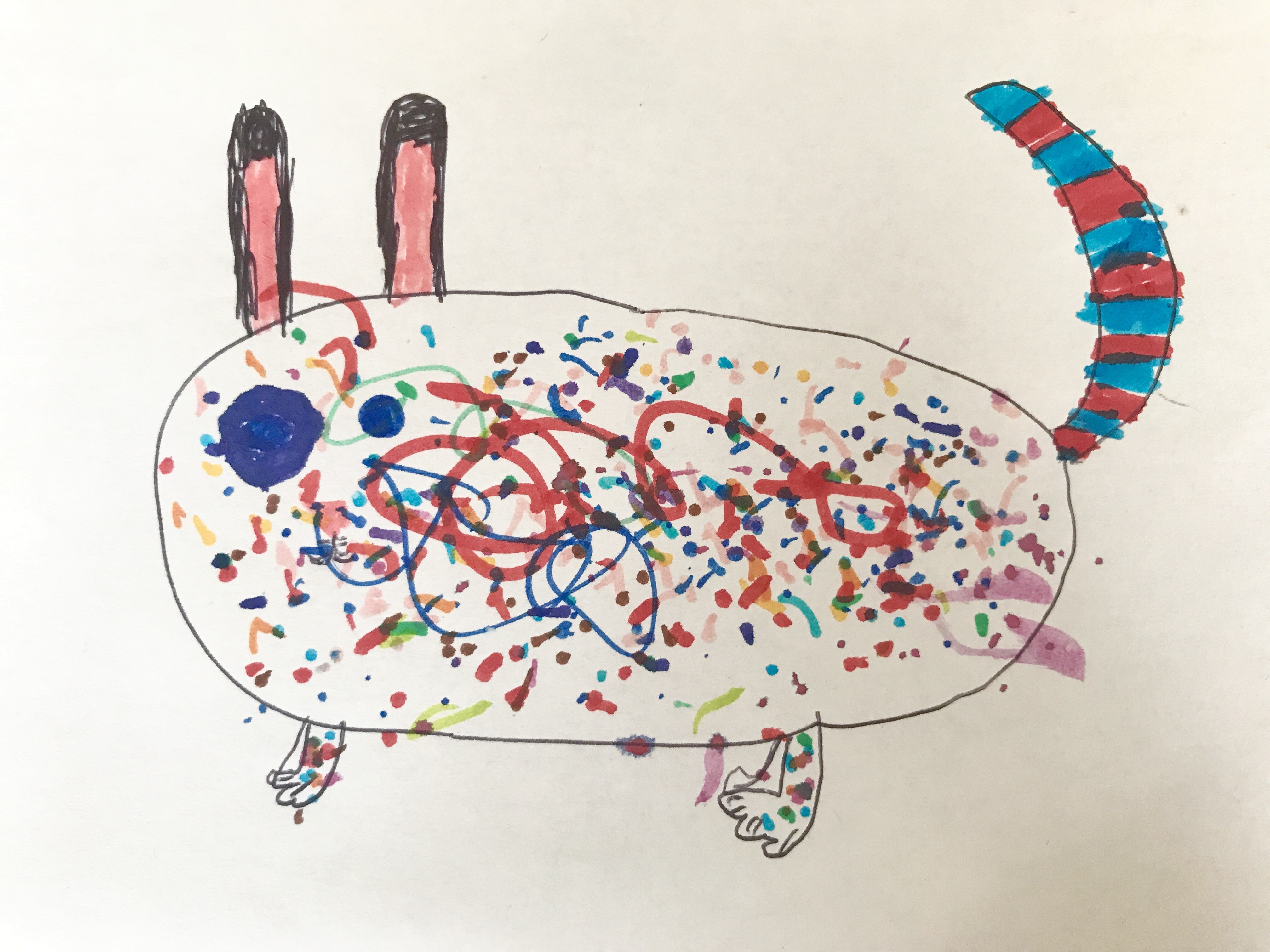 Miss E was the chief artist but she but did a great job of listening to what her brothers had to say. Miss E wanted a rabbit. Little Man wanted a dog. Littlest loves cats. They each wanted their favourite colour to be incorporated and so came up with the idea of dots and squiggles on their pet’s body. Even Littlest added some spots in his favourite colour – green.

I hadn’t told them their drawing was going to be made into a toy. So you can imagine how thrilled they were when a few weeks later Squigglet arrived at the door. 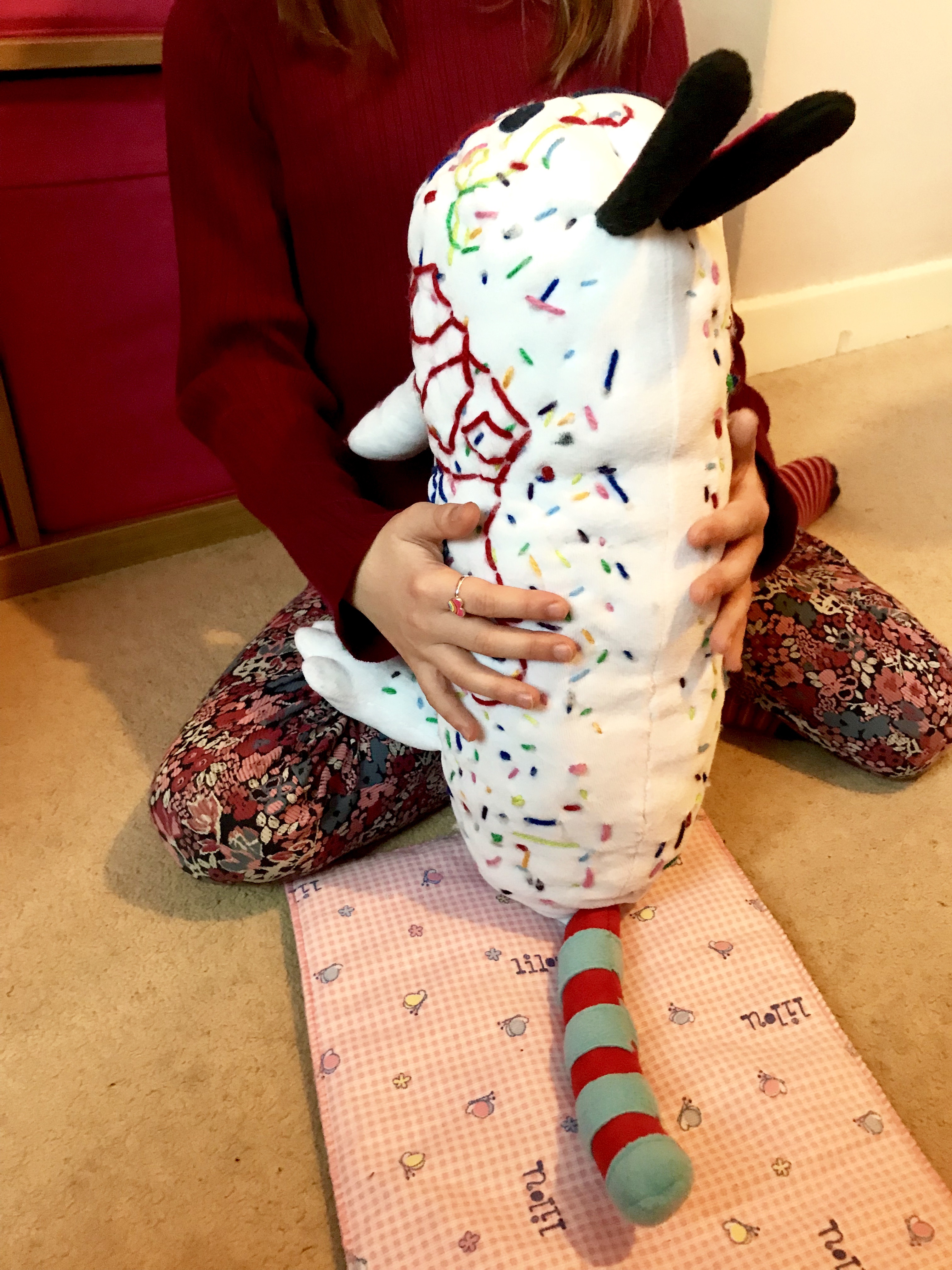 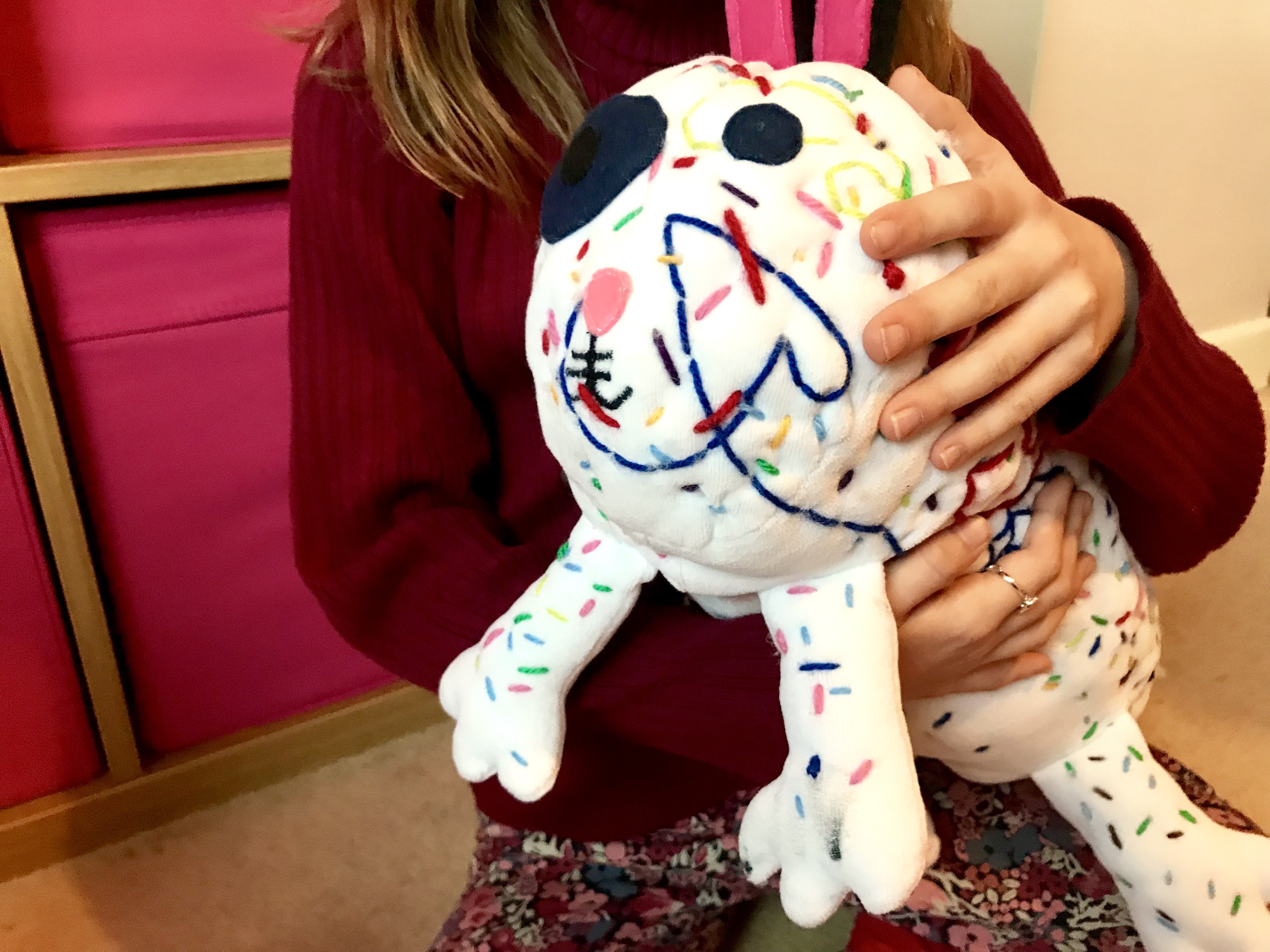 They take it in turns to have him in their bedrooms and I’ve been amazed at how well this has gone so far; no arguments just good turn taking and lots of cuddles for Squigglet. They’ve given Squigglet one of the old blankets from Miss E’s doll’s crib. Plus a little bowl to drink water out of.

The three of them are desperate for a real pet but I’ve told them that will only happen if they can show me how responsible they can be in looking after Squigglet as well as keeping their rooms tidy and generally helping around the house.

I didn’t think they would be able to do it… but it looks like they might be about to prove me wrong!  Perhaps Squigglet could be getting a companion very soon indeed!

If you’re looking for a creative challenge how about getting your children to design their own dream pet? Let me know how you get on.

1 Comment to Introducing Squigglet, our dream pet – with Petplan