*Since writing this review, Dusty Knuckle have moved

to a bigger premisis at The Printhaus, 70 Llandaff Road, Canton

Anyone who knows me in the real world will tell you my all-time favourite food is pizza. In fact, it’s a real winner with everyone in our family. So when Dusty Knuckle Pizza invited us along to dine at their new courtyard pizzeria, we were only too keen to take them up on the offer.

Dusty Knuckle Pizza started life as a pop-up just over a year and a half ago, touring the food markets and festivals of Wales. They soon gained a reputation as one of South Wales’s most exciting street food establishments, even being named one of the Top 25 pizzerias in the UK by The Sunday Times Magazine last month.

In fact, things are going so well for the wood fire pizza company that this week saw owners Phill Lewis and Deb Noyes quitting their jobs in the charity sector to set up a permanent home in Canton, serving up their famous pizzas in the back yard of Crafty Devil’s Cellar Bar and Shop, just off Cowbridge Road East.

With having to walk through the micro brewery bar and shop, I must admit I wasn’t sure how child-friendly it would be. But like I said, the pizzas have an amazing reputation so I couldn’t turn down an invite to try them out. 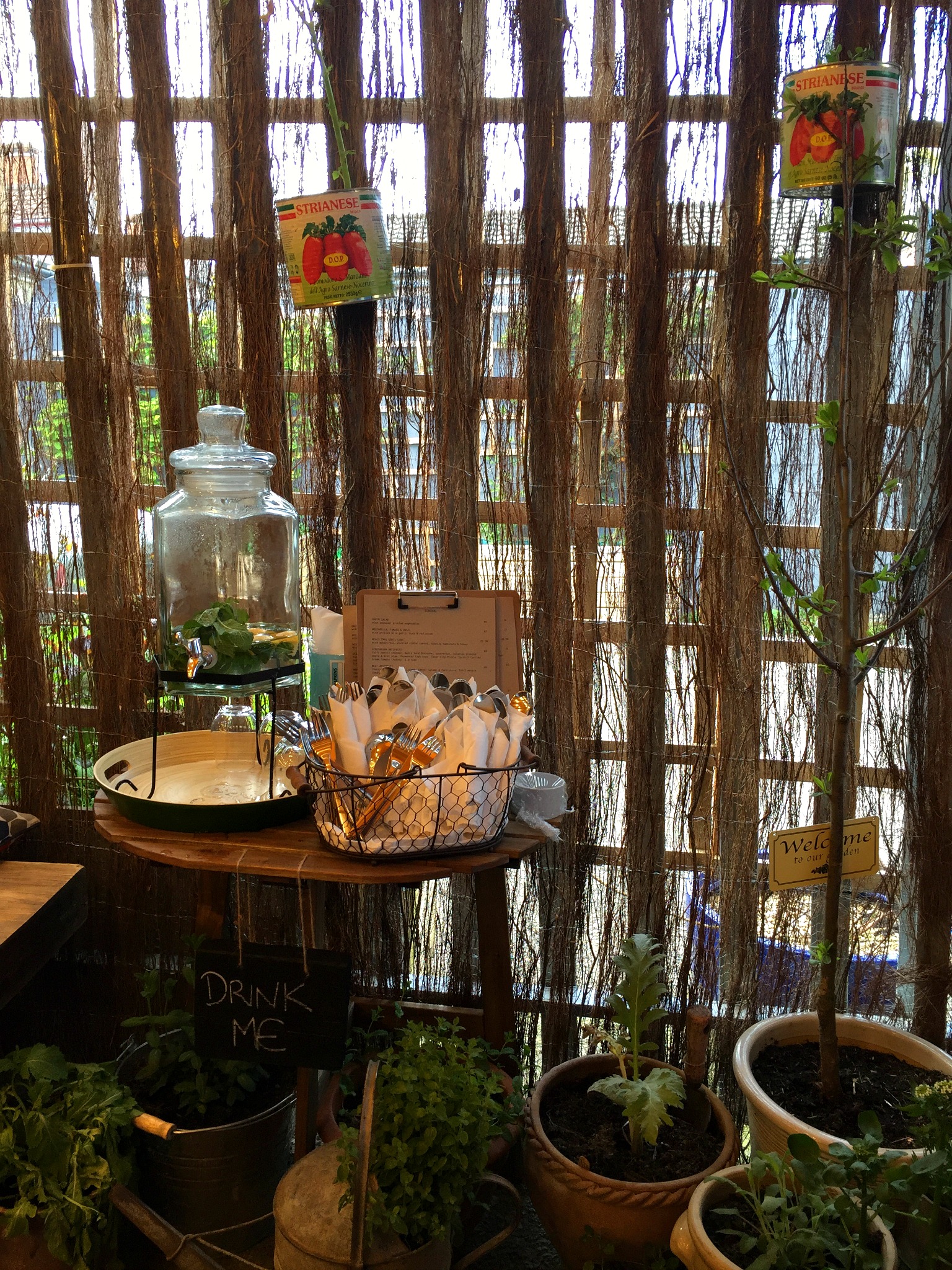 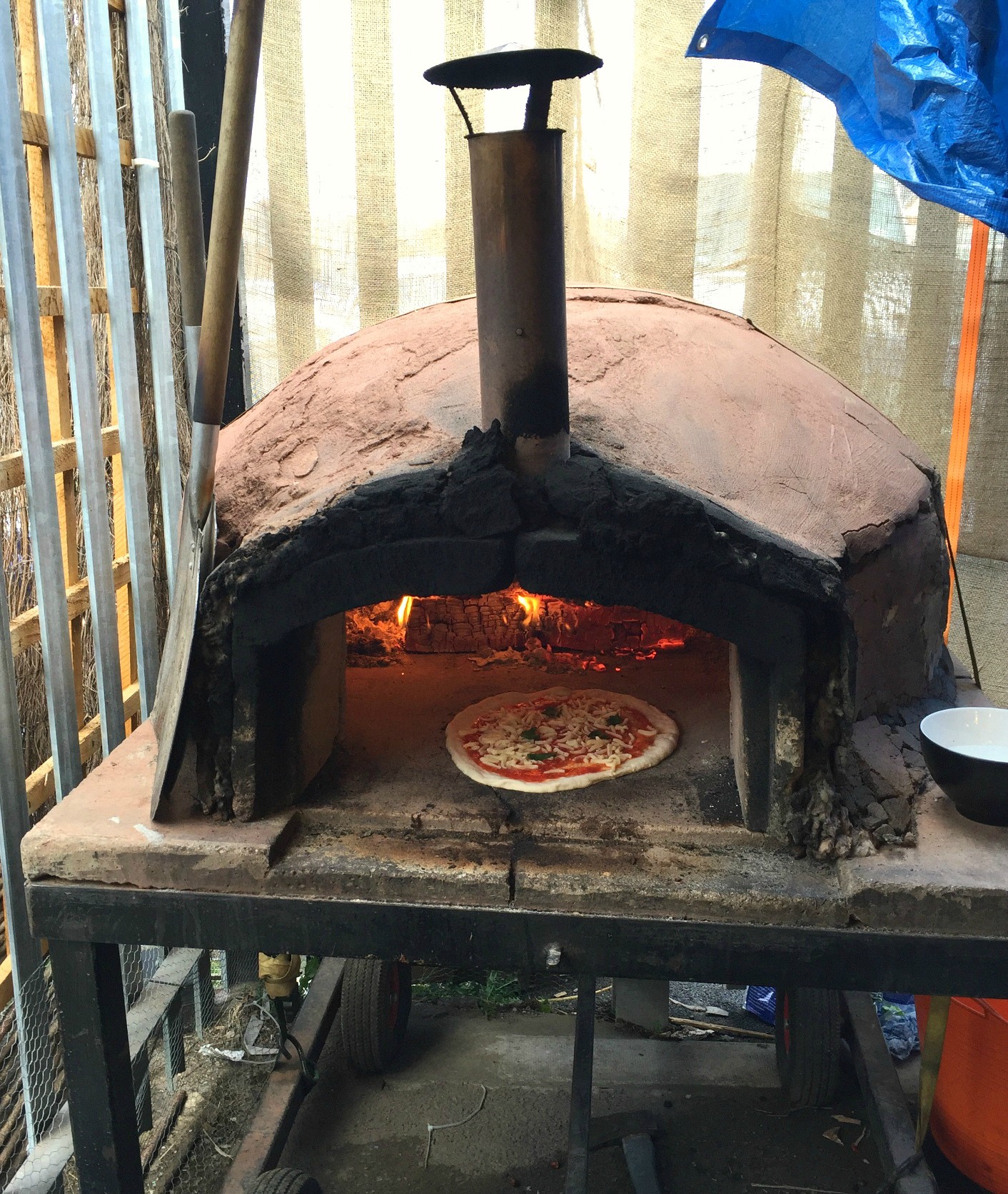 We headed along yesterday (Saturday) at around 5pm and were greeted by Phill himself who reassured me that children are very welcome – he’s a dad of four, and straight away pointed out his partner Deb, sat cuddling their newborn baby daughter, born on Thursday (talk about a crazy week – a new daughter and a new business launch!), while their toddler daughter played in the courtyard. There was a constant flow of other families making the most of early evening dining while we were there, and although the courtyard is quite small, the atmosphere was so casual that we were never made to feel like our children were a nuisance. In fact, my children quickly discovered the box of toys, colouring sheets and pencils, and we were given plastic cups and cutlery for our toddler. The only slight downside is that there is only one small toilet in the bar and no baby changing facilities.

The dining area is really informal with the bamboo fenced walls, retractable tarpaulin roof, and herbs you are welcome to pick to add to your food growing in old tomato cans on the walls a good testament to its street food roots. I did wonder how cold it would get, especially in the Welsh winter – but there’s a box of blankets and woollen cushions for diners to help themselves to, and a chimera. Phill told me he’s also investigating different styles of table heaters for when the colder weather hits. 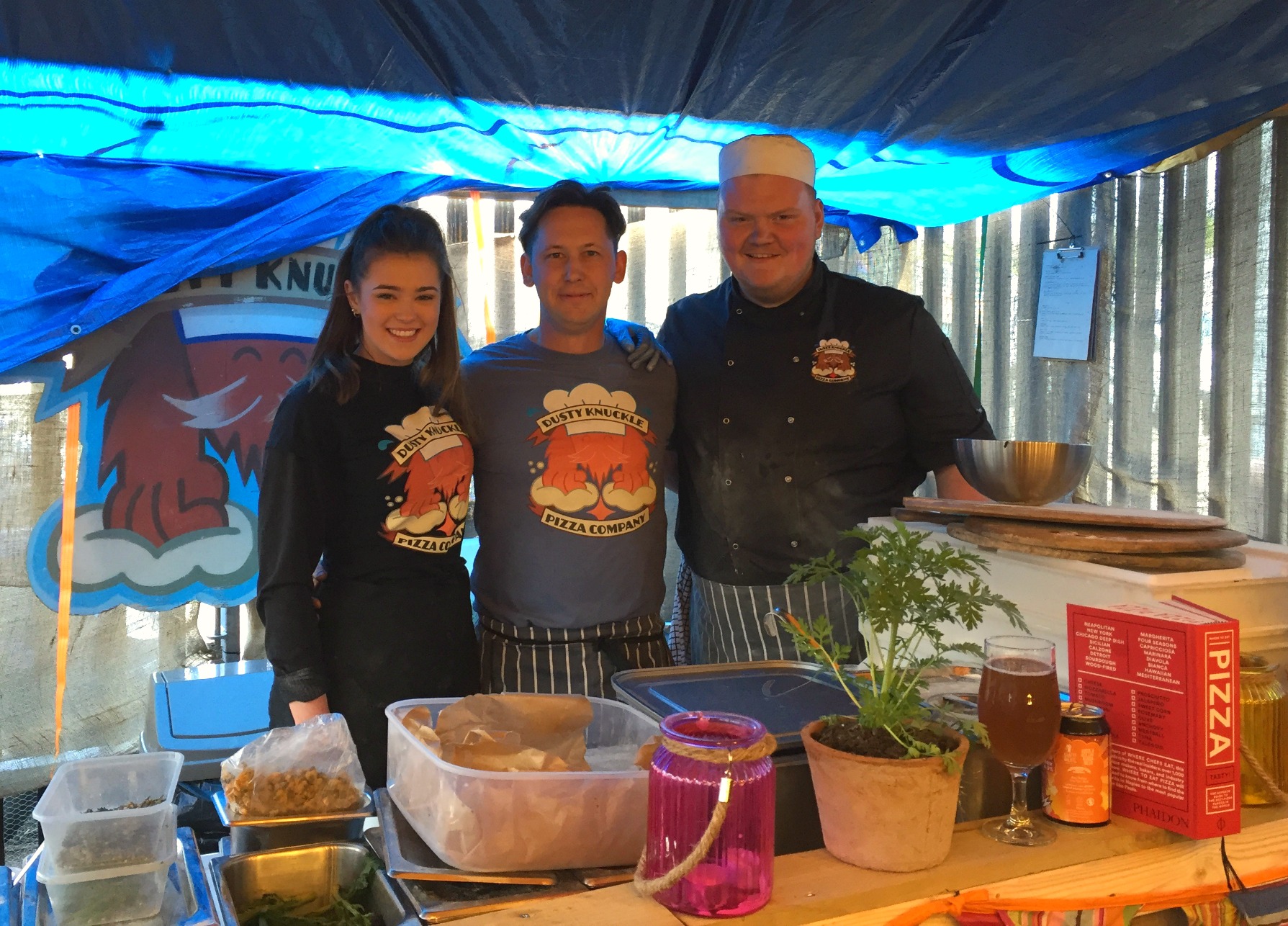 Phill, centre, and his staff

Holding around 25-30 people, three long wooden tables with benches are designed to be shared between guests. This creates a really friendly atmosphere, with diners chatting among themselves. We were sat right next to the kitchen area, where my children – six-year-old Little Miss E, 4.5-year-old Little Man O, and two-year-old Toddler Boy I – were fascinated with watching chef Ross preparing the pizza bases in the wood fire pizza oven. Heated to around 400-500 degrees, the pizzas cook in less than a minute. 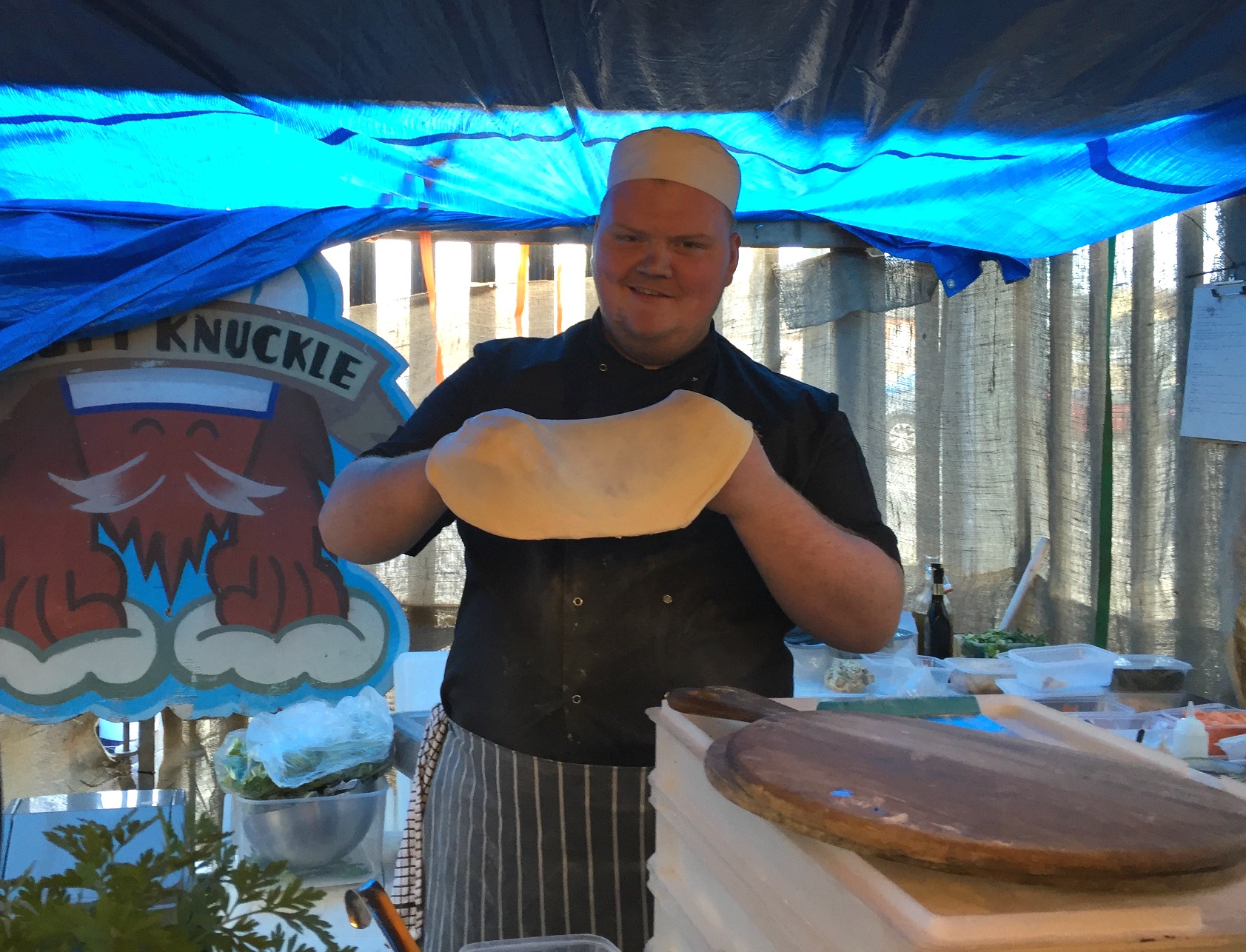 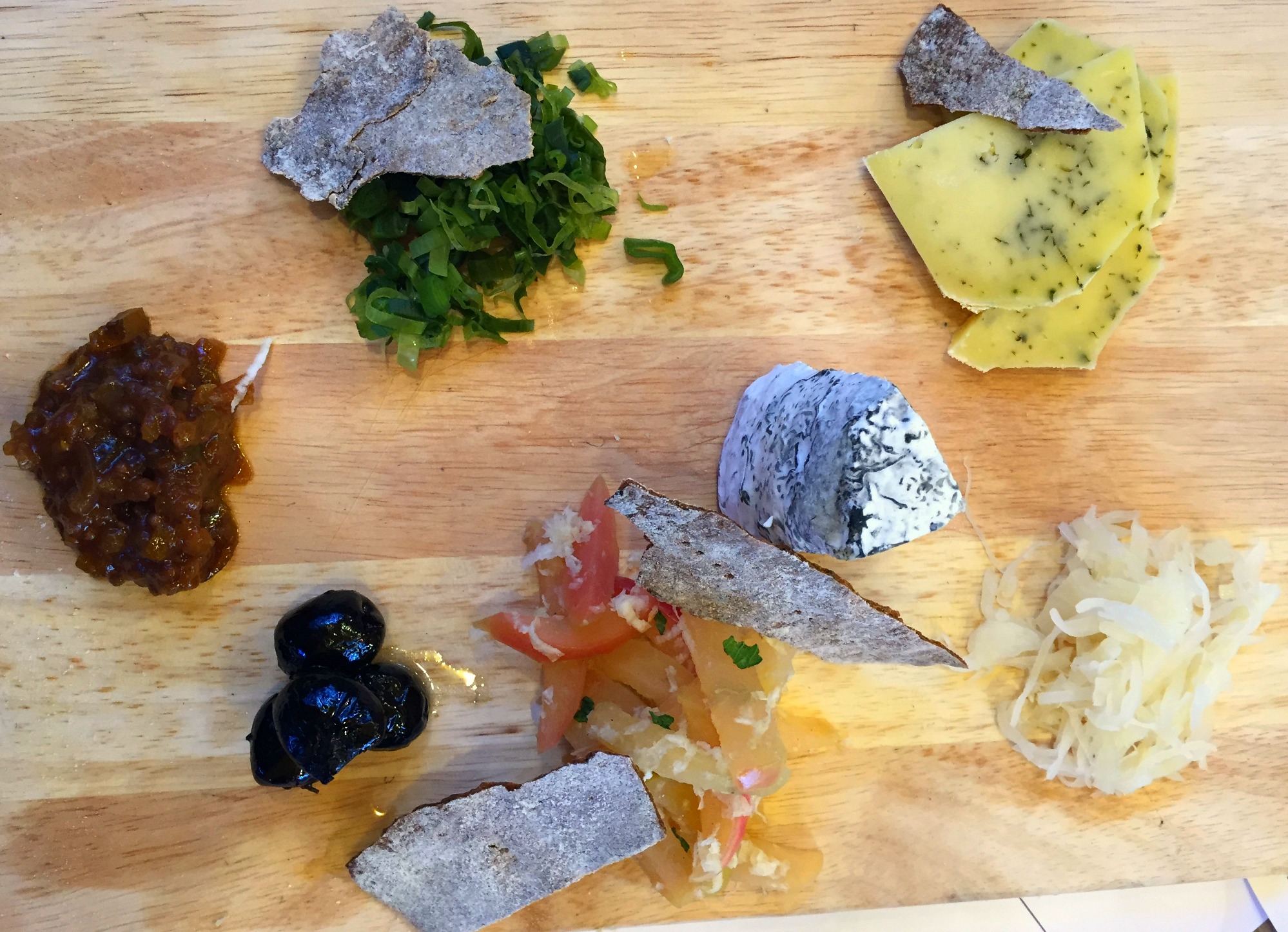 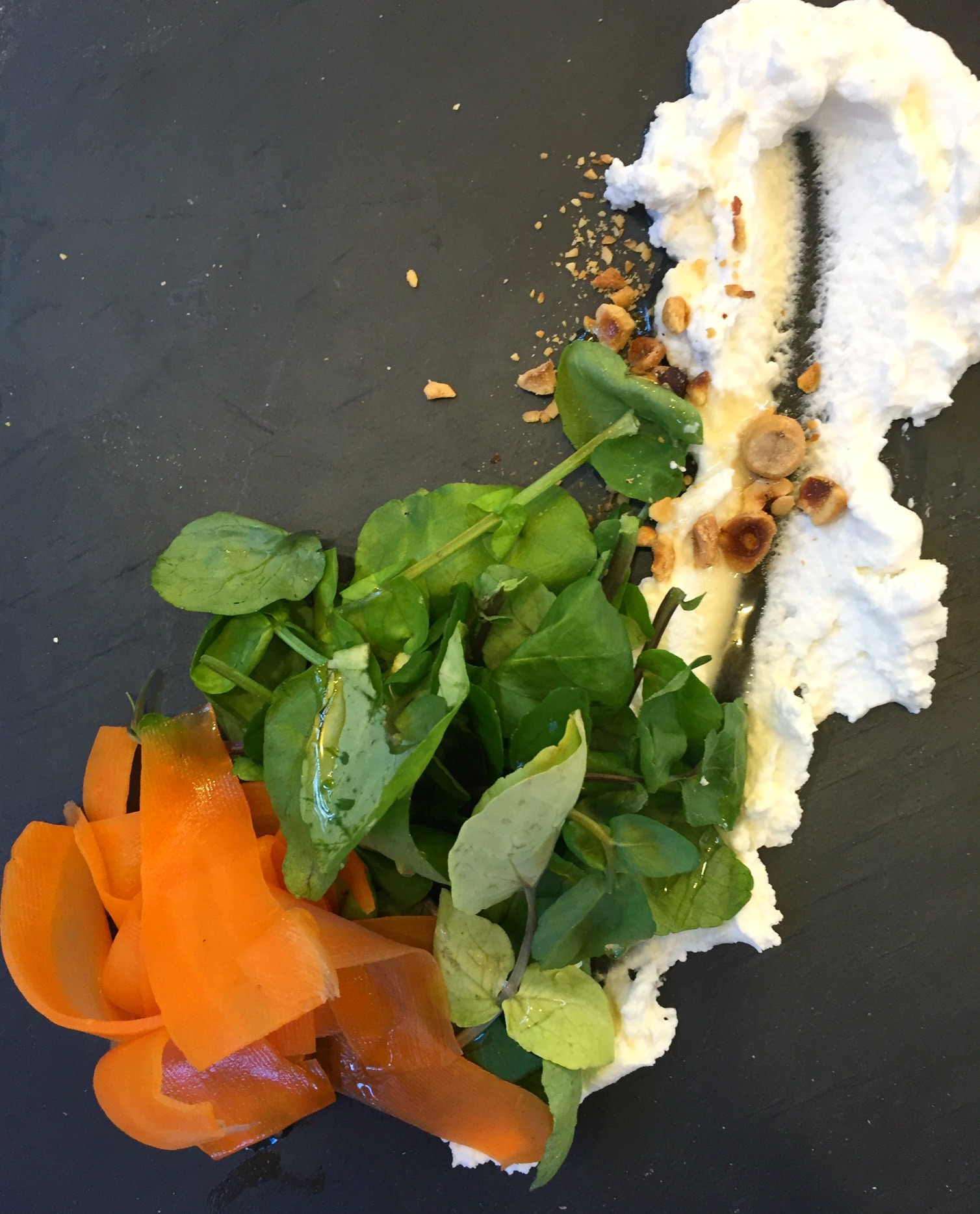 We started our meal with the vegetarian antipasti and Neal’s Yard goat’s curd. Presented on wooden and slate boards, my children were a little unsure, but I love this style of food.

The goat curd was so incredibly soft and creamy and contrasted well with the tangy taste of the pickled ribbon carrot. The green tomato chutney on the antipasti platter is made by Cardiff’s Inner City Pickle, who are well-known on the local food market scene. It was incredible, especially when accompanying the Teifi nettle cheddar. Using Welsh producers is important to Phill, who grows or home-makes as much as he can, sourcing the rest as locally as possible. 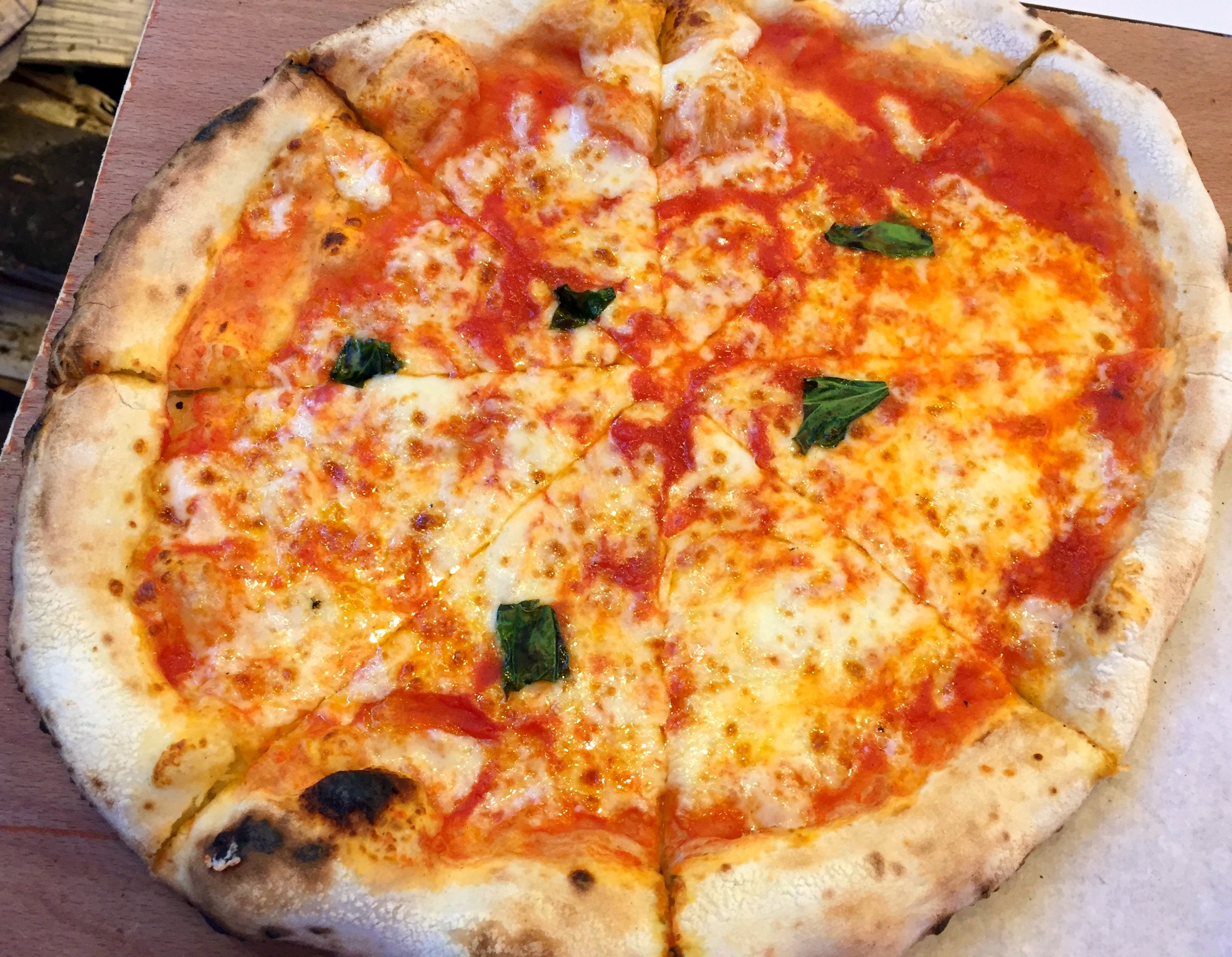 The pizzas tasted as good as they looked. The base was light – a combination of the long proving process and the hand-spinning techniques which saw the dough become so incredibly thin I couldn’t believe it didn’t break – with just the right hint of smokiness and slightly charred edges.

My children shared a couple of Margheritas between them with Little Miss E announcing completely unprompted that the pizza was “the best pizza I have ever tasted”. They demolished two between the three of them, although I did manage to sneak a slice and was equally impressed.

Cardiff Daddy opted for the pepperoni, with thick slices of the spicy sausage exclusively made for Dusty Knuckle by BBC Food and Farming 2016 Best Food Producer winner, Charcuterie Ltd from Carmarthenshire. 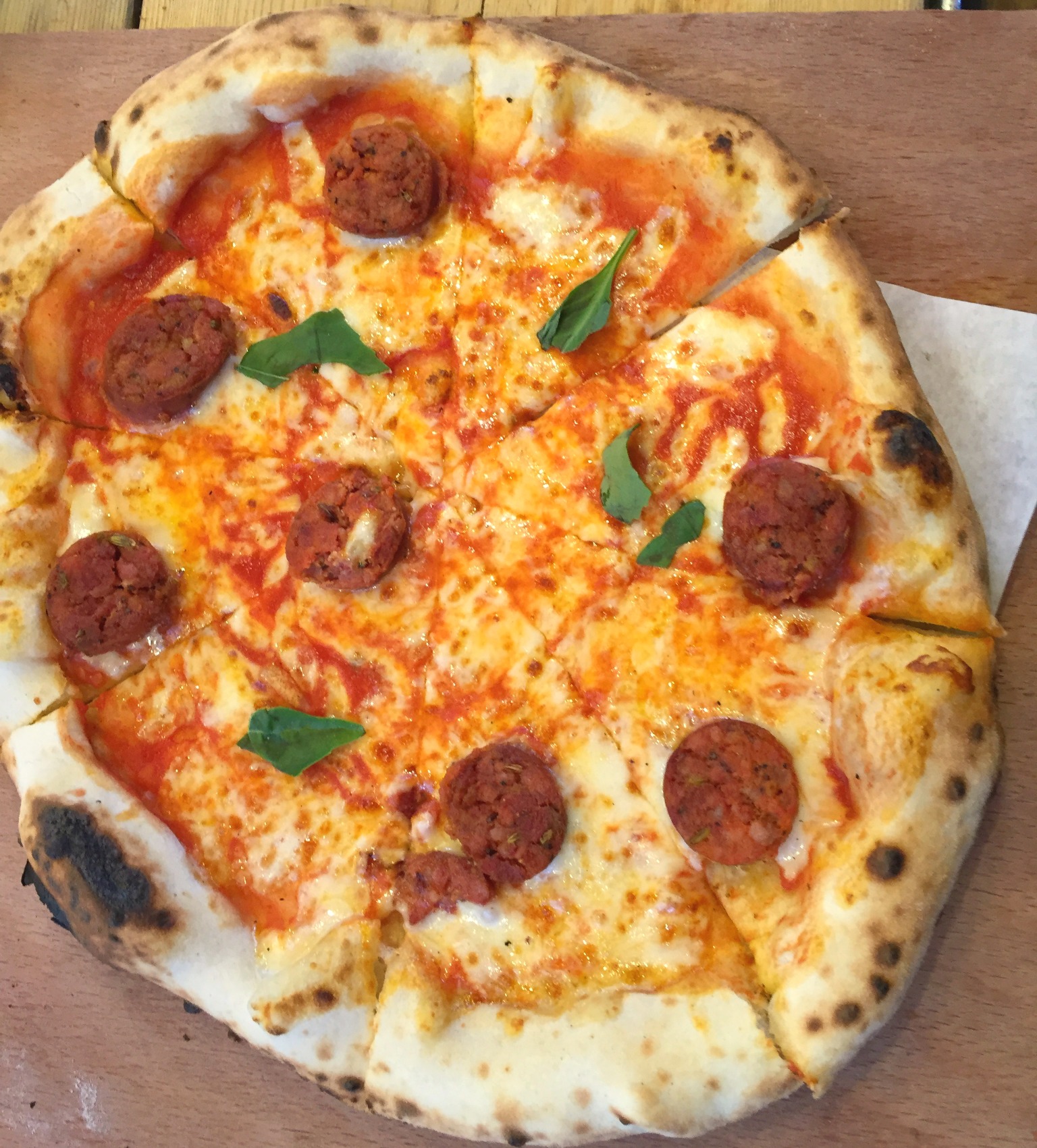 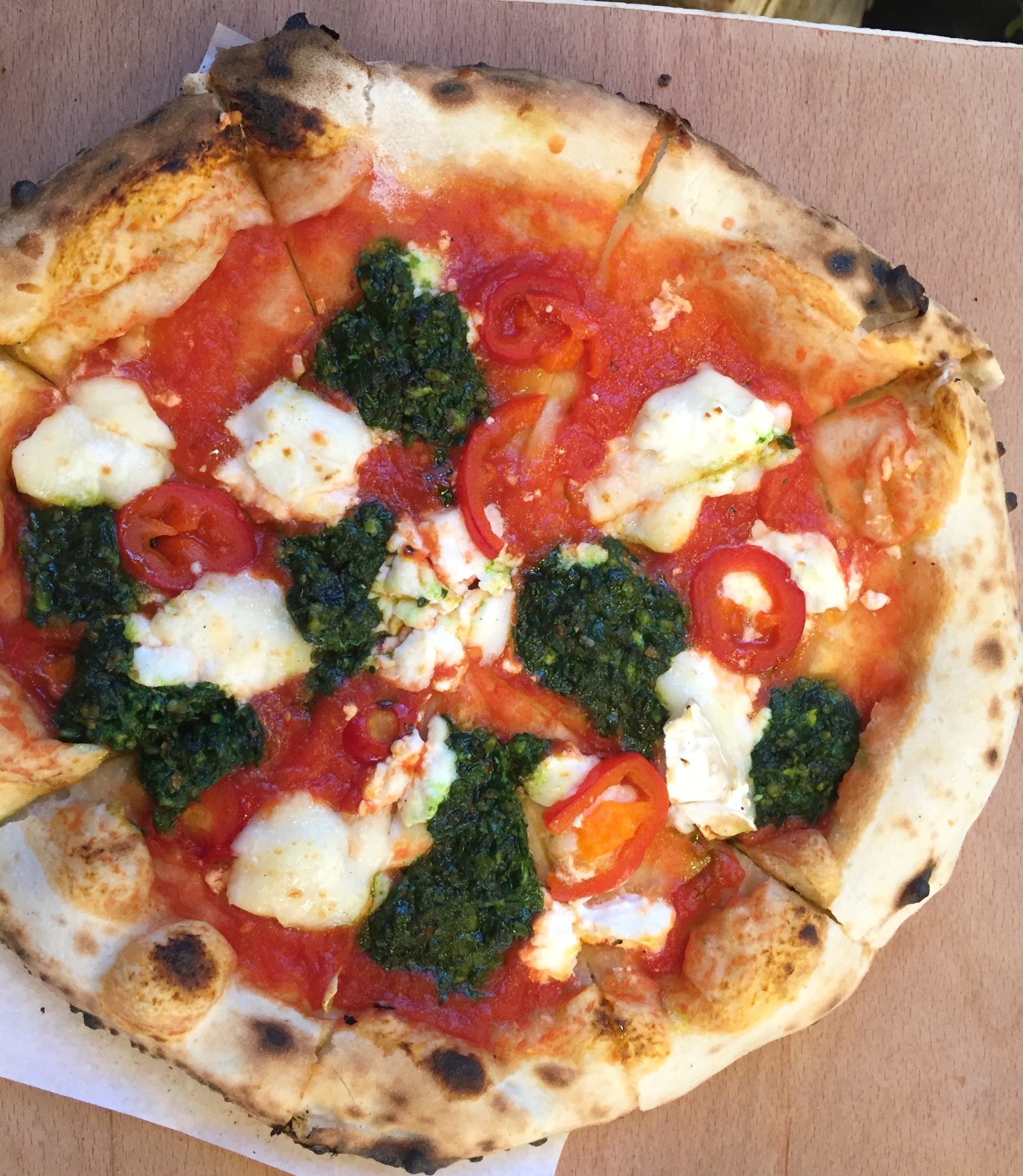 I chose goat’s cheese with homemade wild garlic pesto and roquito pepper – the three distinctive and strong flavours work really well together. I could have eaten the pesto straight with a spoon from a jar; it was delicious.

Dessert-wise, there are three choices – panna cotta with bergamot, chocolate mousse with rosemary, and ice cream topped with crunchy honeycomb. All three are deliberately light, so as not to feel too heavy after the carb-laden pizzas. 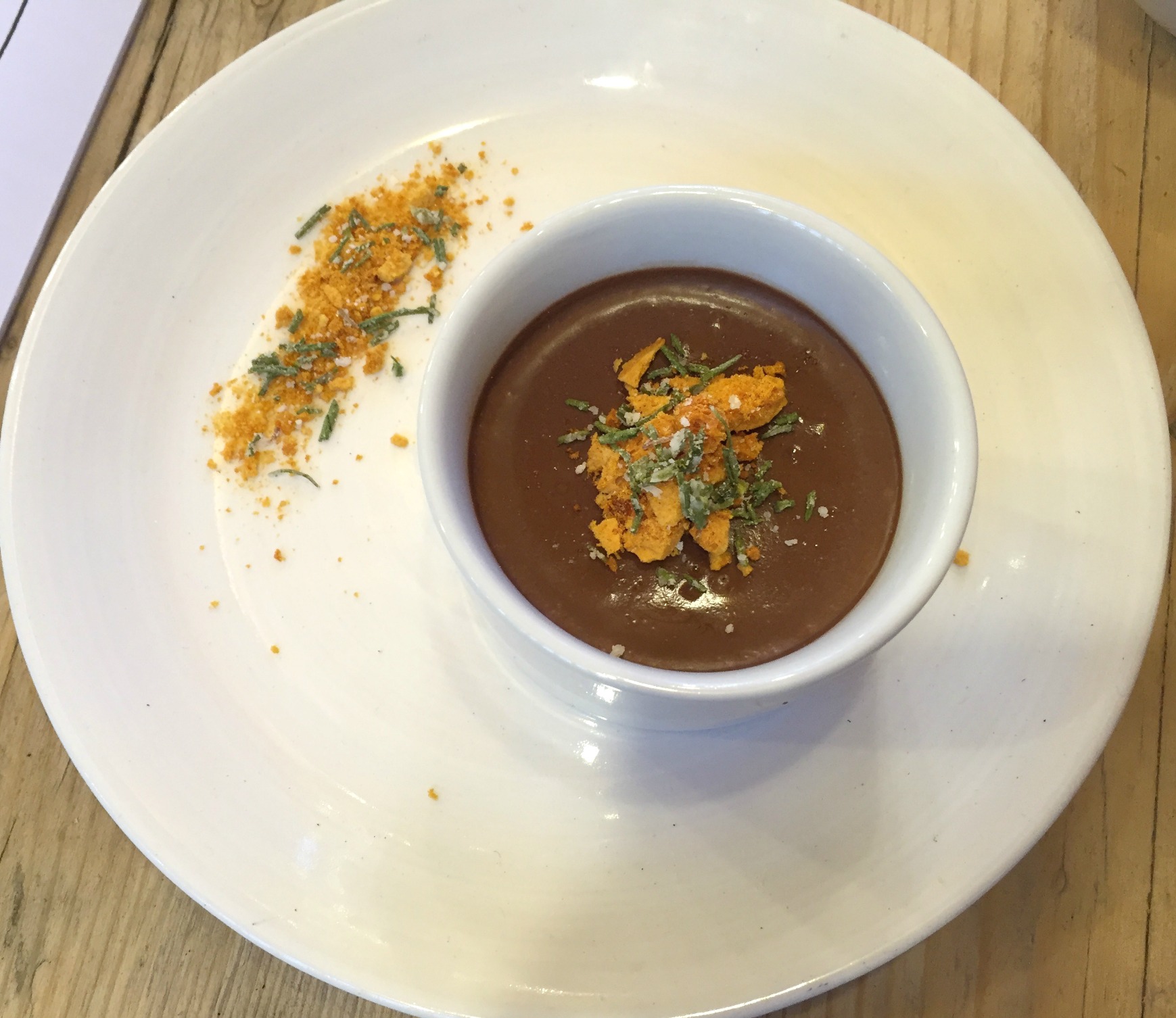 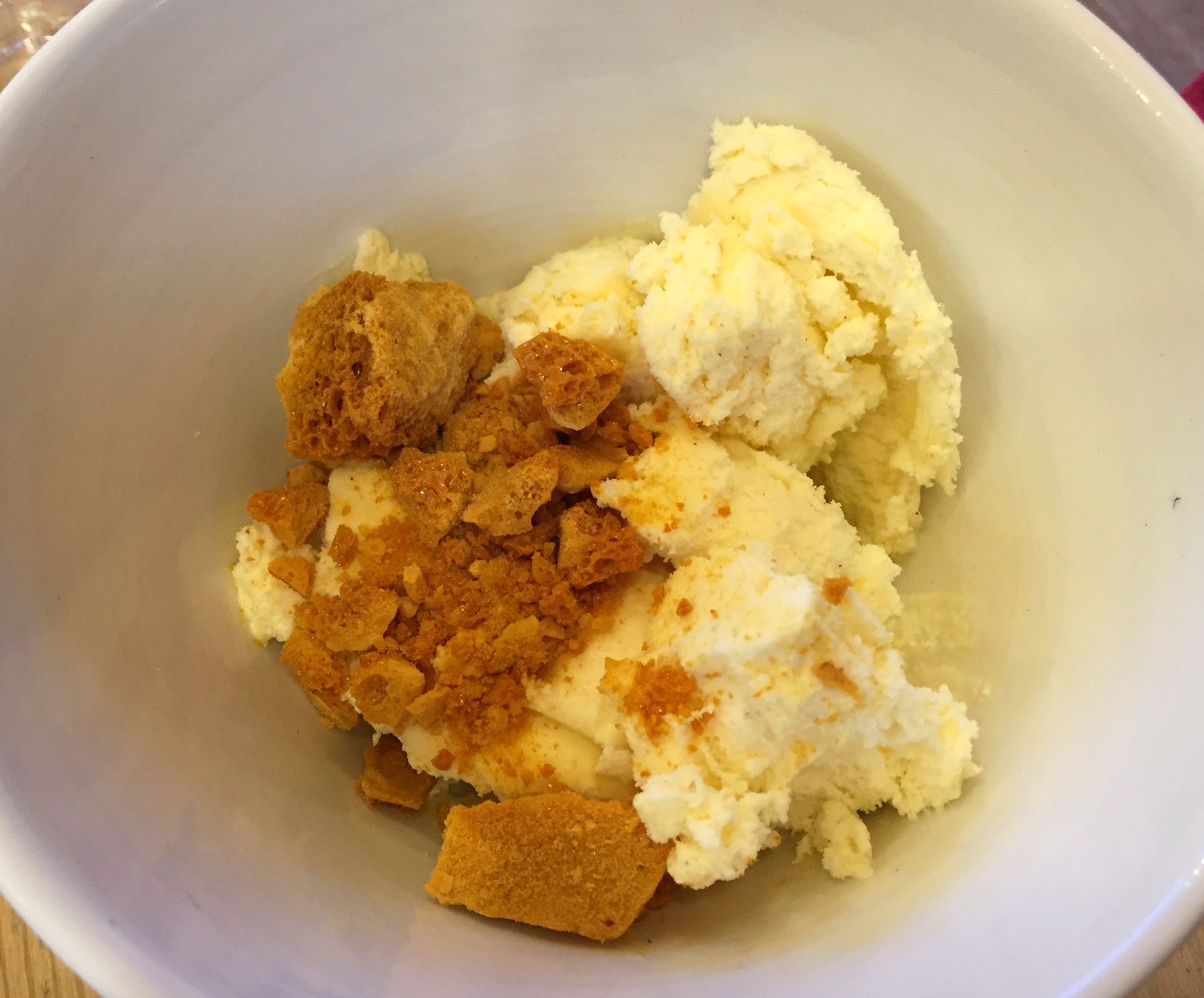 My children loved the deliciously creamy vanilla ice cream from Gwynne’s Ice Cream, while the chocolate mousse has a beautifully rich flavour without being too heavy.

Cardiff Daddy accompanied his food with a can of The Devil’s Knuckle, a brew especially created by the micro brewery to complement the goat’s cheese pizza, but according to him just as good with Pepperoni too. The rest of us had lemon and herb infused water, poured excitedly by my children from the water cooler at the side of the restaurant.

Being nestled in Canton, just a stone’s throw from Chapter Arts Centre with its cool and creative vibes, I wondered if it’d feel pretentious or too hipster-ish. Yes, it’s quirky and very different to the usual pizzerias in Cardiff, but it didn’t feel that way at all. We were impressed with the friendly service, the relaxed atmosphere, the quality of the food and the decent prices.

It’s great to see the Cardiff street food scene making its permanent mark on the city’s dining culture, following close on the heels of Hangfire Smokehouse and Got Beef who have also found their own permanent bases too.

As Phill himself concludes, “We know what we do is a bit different and we won’t be to everyone’s taste, but those who do ‘get’ us will love it.”

And love it we did. I can’t wait to go back. 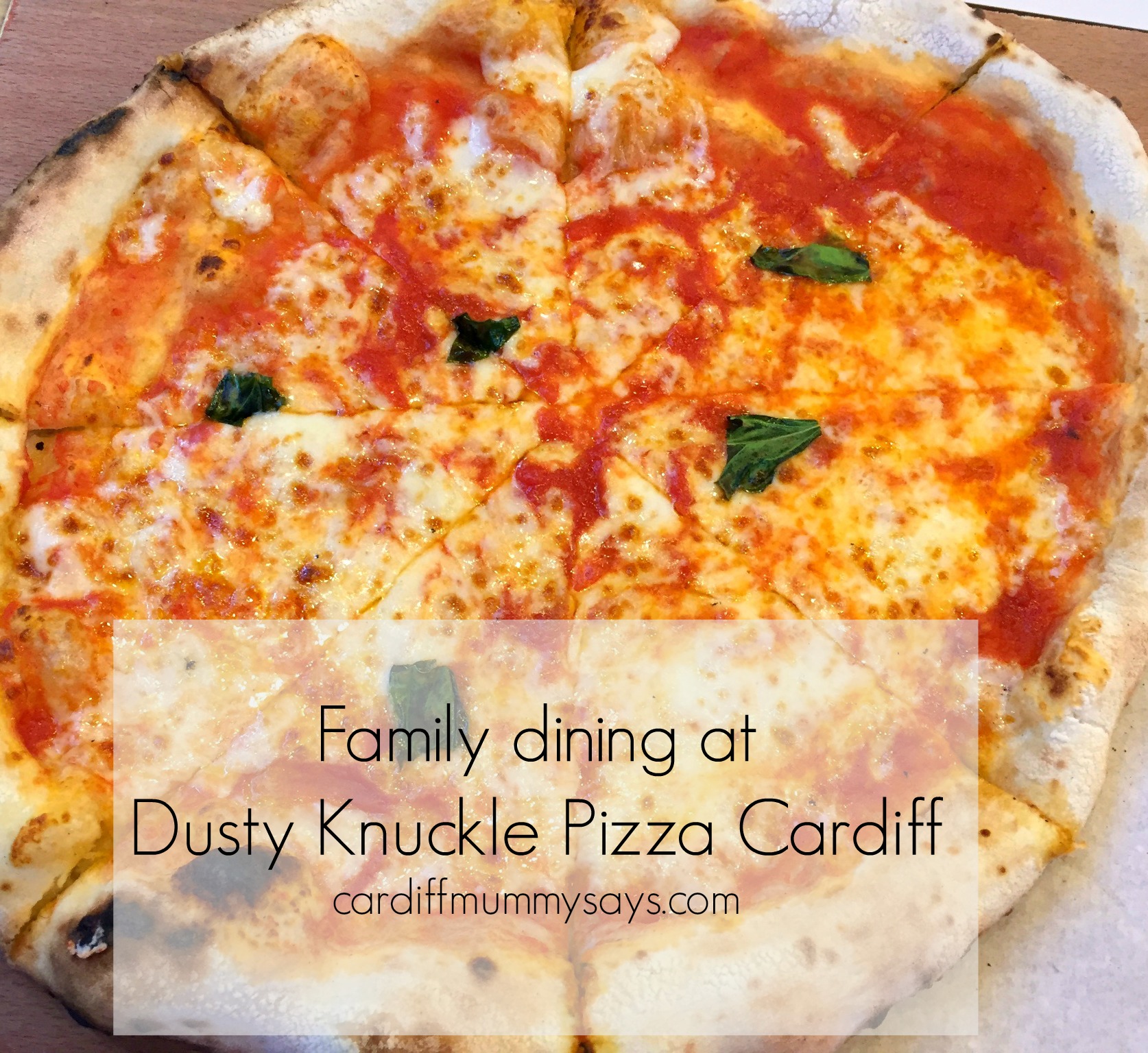 As of July 2016, Dusty Knuckle Pizza have moved to a new and bigger premises at The Printhaus, 70 Llandaff Road in Canton. It’s open Thursday to Sunday. Follow them on Twitter for the latest updates and opening times.

Have you been to Dusty Knuckle Pizza? Do let me know in the comments below, by tweeting me on @cardiffmummy or on the Cardiff Mummy Says Facebook page.

*We were given a complimentary meal for the purposes of this review. All opinions are my own.