Bute Park is one of my favourite outdoor spaces in Cardiff – a 130 acre beauty spot right in the centre of our city. It’s perfect if you want a break from the hustle and bustle of a shopping trip to the city centre, or is more than worth visiting in its own right,

We headed there over the recent Easter holidays, spending around three hours in the park following a trip to Cardiff Castle.

(That’s two more places added to our 52 free family days out in South Wales challenge for 2019. The park is free to visit, and if you live or work in Cardiff you can apply for a Castle Key, which for an admin cost of £6 (no charge for children) gives free entry to the castle for three years.)

Being on the Taff Trail, Bute Park is easy to access by bike or walking, but as we had a few city centre errands to run first we drove in to town for this particular visit. We parked in the civic centre, opposite the Royal Welsh College of Music and Drama, which is close to the park entrance we use most frequently. However, today we accessed the park via the entrance near the Pettigrew Tearooms, having spent a few hours at the castle first (you can read a previous review of a day out at Cardiff Castle here).

The Bute Park website provides a detailed history of the land but as most locals will know, from 1766 it was owned by the wealthy Bute family, along with Cardiff Castle. Landscape gardener Andrew Pettigrew (yes, that’s where the tearooms get their name) worked with architect William Burgess to develop the landscaped pleasure gardens to match the ornate castle interior. In 1947, the Fifth Marquess of Bute gifted the Castle and its grounds to the people of Cardiff and it became a public park.

There’s so much to see in Bute Park, you could spend the whole day there and still not see it all.

The park is famous for its arboretum collections and has more than 3,000 tree species in the park. Bute Park holds the honour of having the greatest number of ‘champion trees’ – the tallest or broadest examples of their species anywhere in the British Isles – in any UK public park.

It won’t take you long to see it’s a haven for wildlife, with squirrels, ducks and birds easy to spot – as well as woodepckers, herons, and even otters, if you’re lucky.

When my children and I visited over Easter, we were talking about the things we love most in the park. We came up with this list, not in any particular order, which we thought we’d share here in the hope it will inspire other families on their adventures.

Have you been to Bute Park? Do let me know in the comments below or on the Cardiff Mummy Says Facebook page. You can also tweet me on @cardiffmummy or follow @cardiffmummysays on Instagram for more photos of our visits here and to other attractions in South Wales and beyond. 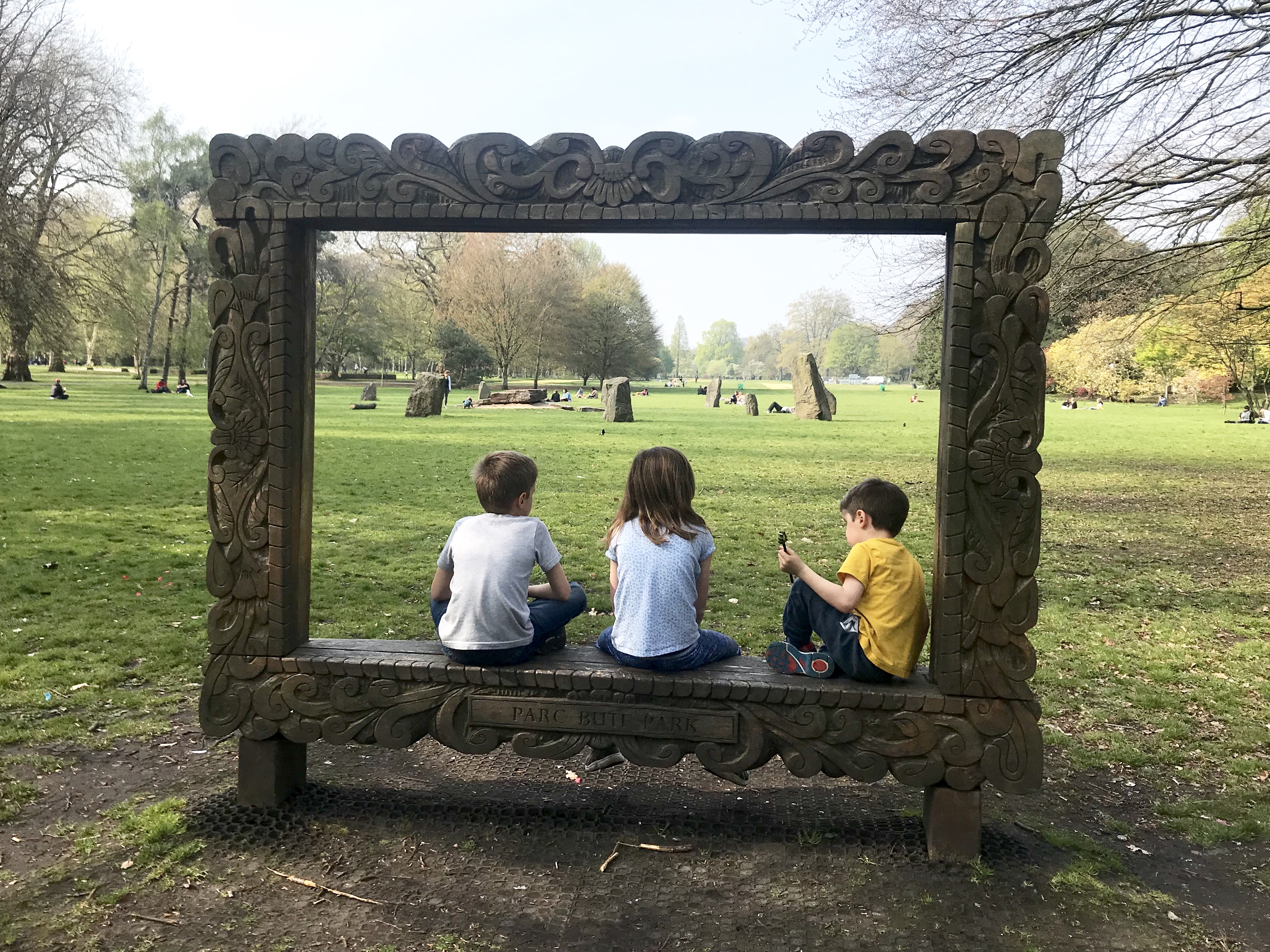 Chances are you’ve seen Bute Park’s giant wooden picture frame on social media. It makes for such a good photo opportunity, after all. My children love striking a pose and pretending to be works of art. The Gorsedd Stones from the 1978 National Eisteddfod sit behind it. The frame is one of 20 wooden sculptures dotted around the park (you’ll soon be able to read more about them here) and is located near to the castle entrance. You can find it near the Pettigrew Tea Rooms entrance to the park.

The remains of Blackfriars Abbey 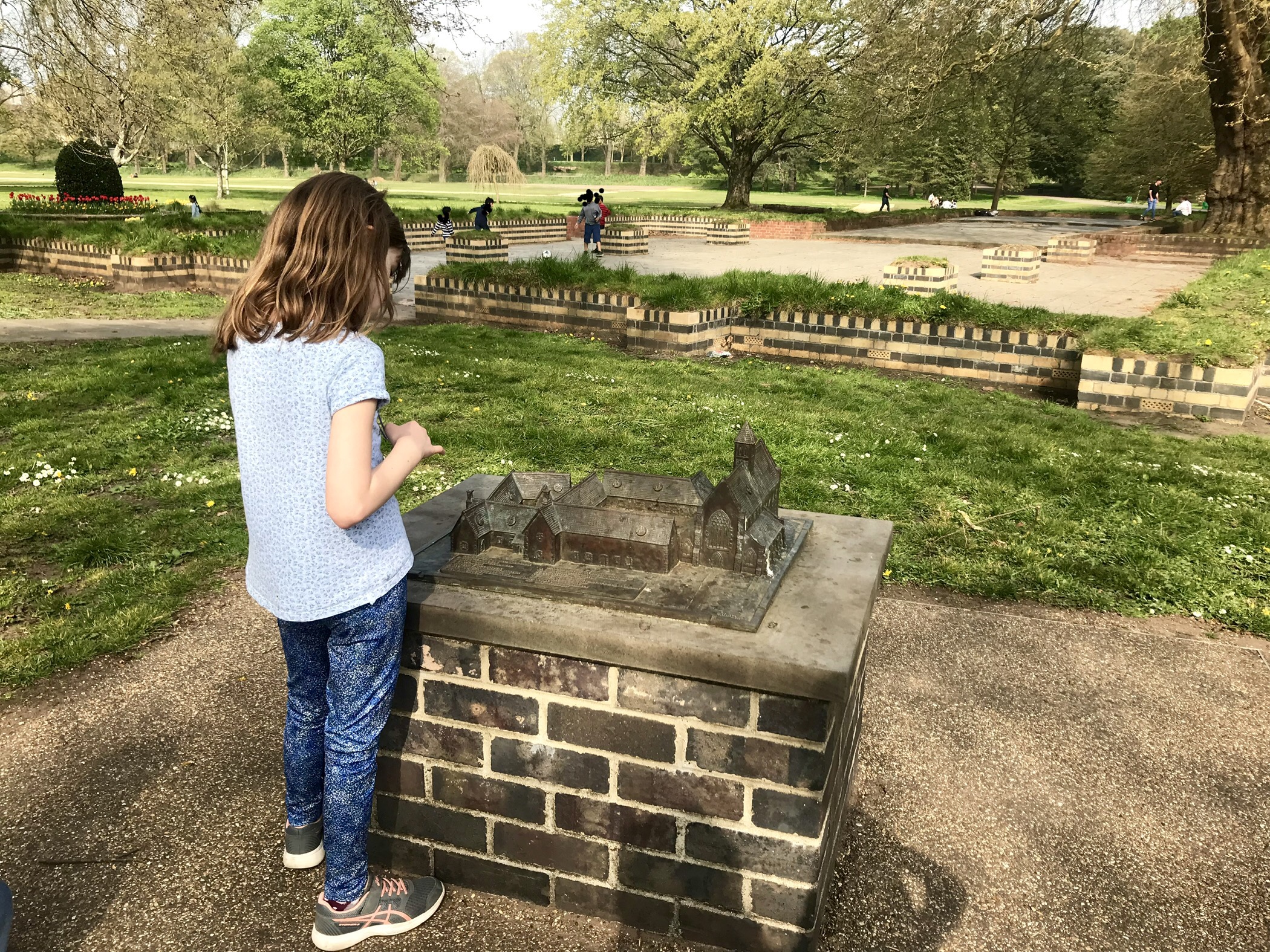 My children used to pretend this was a theatre and put on shows, but it’s actually a Scheduled Ancient Monument and one of the most important friary sites in Wales. Established in 1256, it was occupied for 288 years. The site was excavated in 1887 at the request of the third Marquess of Bute, with architect William Frame interpreting the site as an ornamental feature garden. Information panels at the site tell the story of the abbey while a 3D model shows how it would have looked in its prime. You can read more about the abbey’s history here. You can also read or listen to more about the history of Blackfriars Abbey and 13 other historically noteworthy points around the park with the QR code trail. Download for free from your app store. 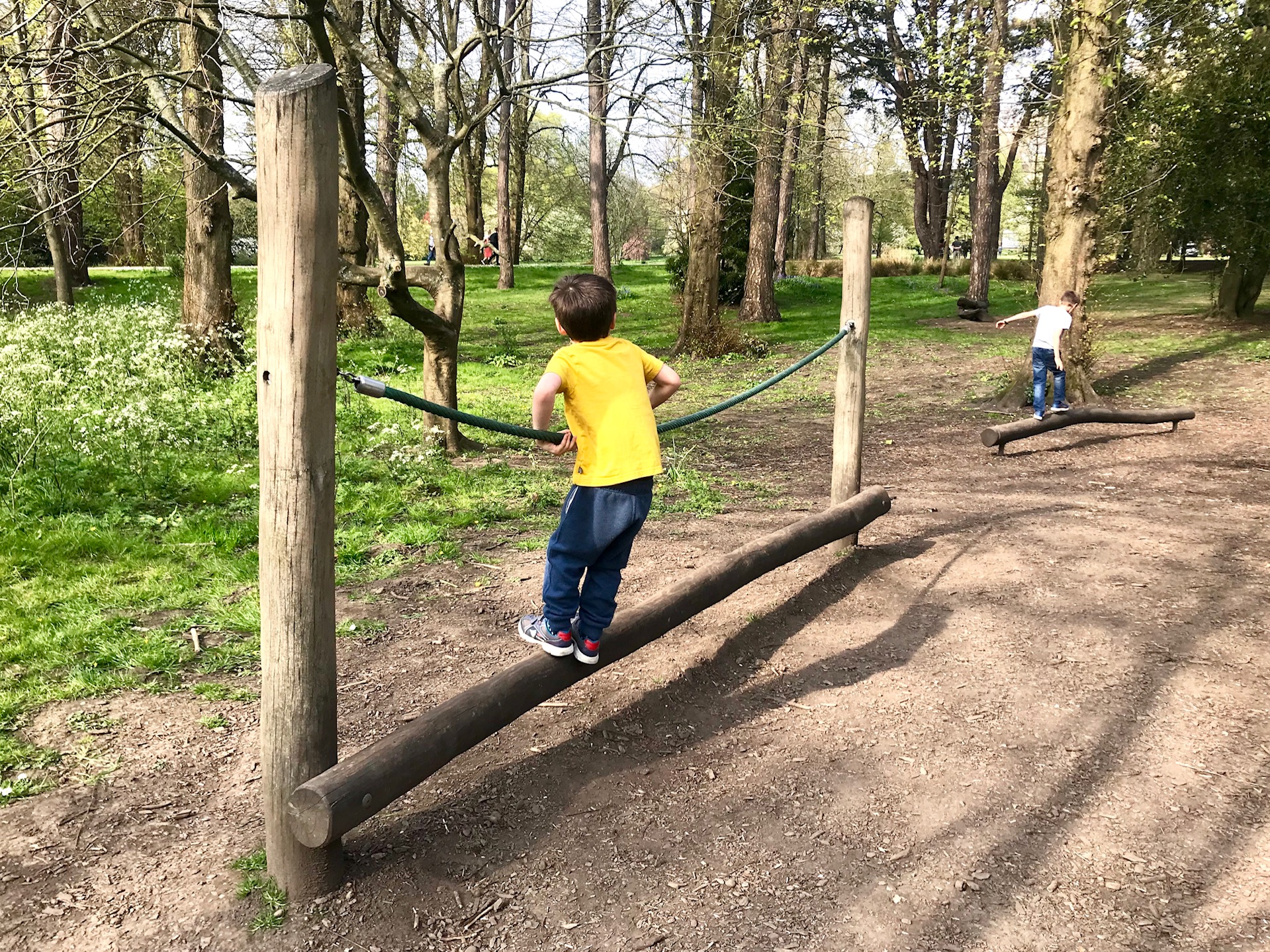 Bute Park doesn’t have a traditional playground, which is one of the many reasons I love it, but it does have the woodland play trail. The 11-feature obstacle course is great for testing their balancing and coordination skills. You can also spot a few animal-themed wooden sculptures nearby. 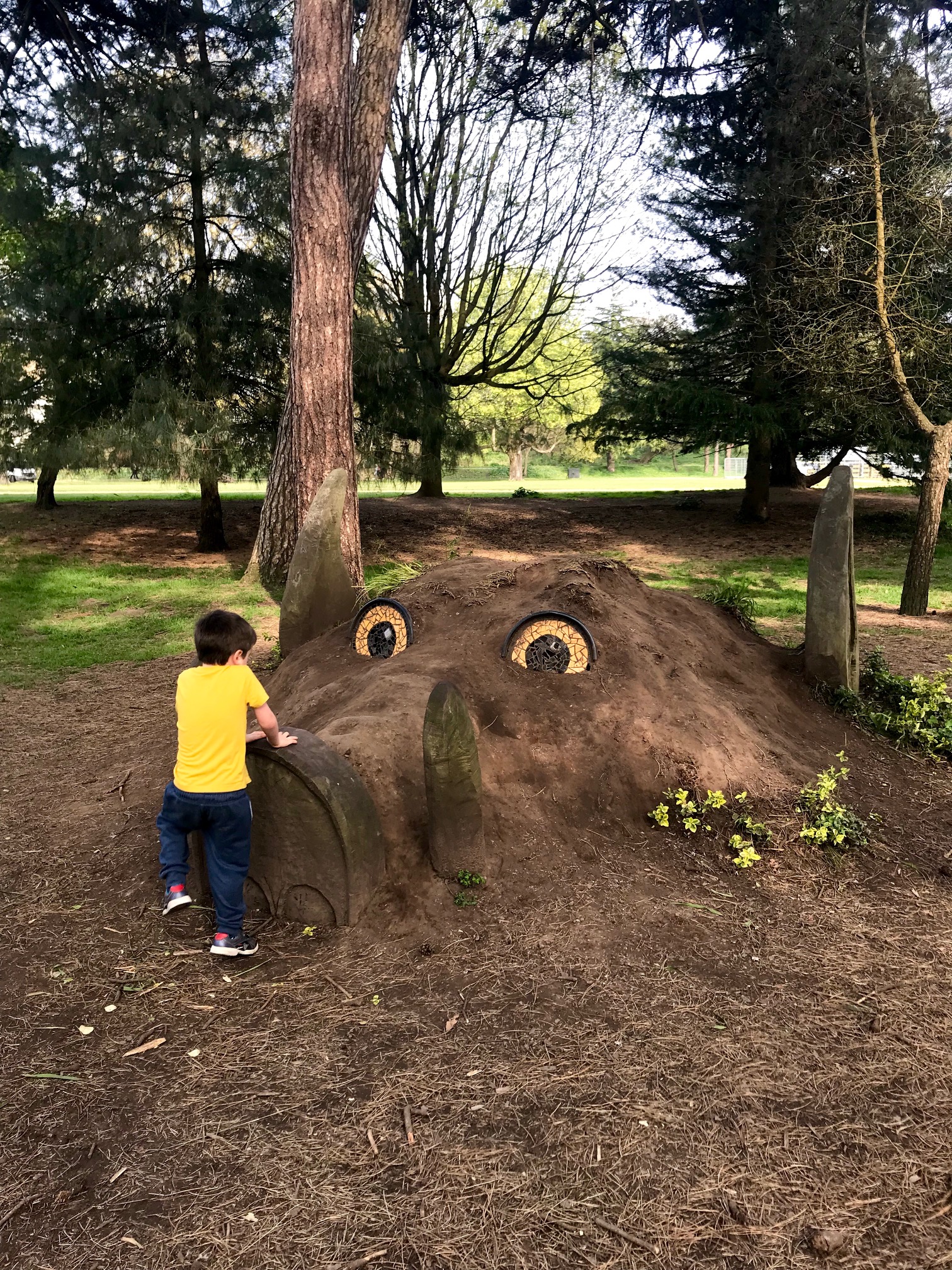 Most young children, including mine, call this the Gruffalo because of its resemblance to the Julia Donaldson/Axel Scheffler creation with its orange eyes and tusks. But it’s apparently a warthog called Pumba. I love how he changes throughout the season as grass and flowers grow on the top of his head, looking like hair. 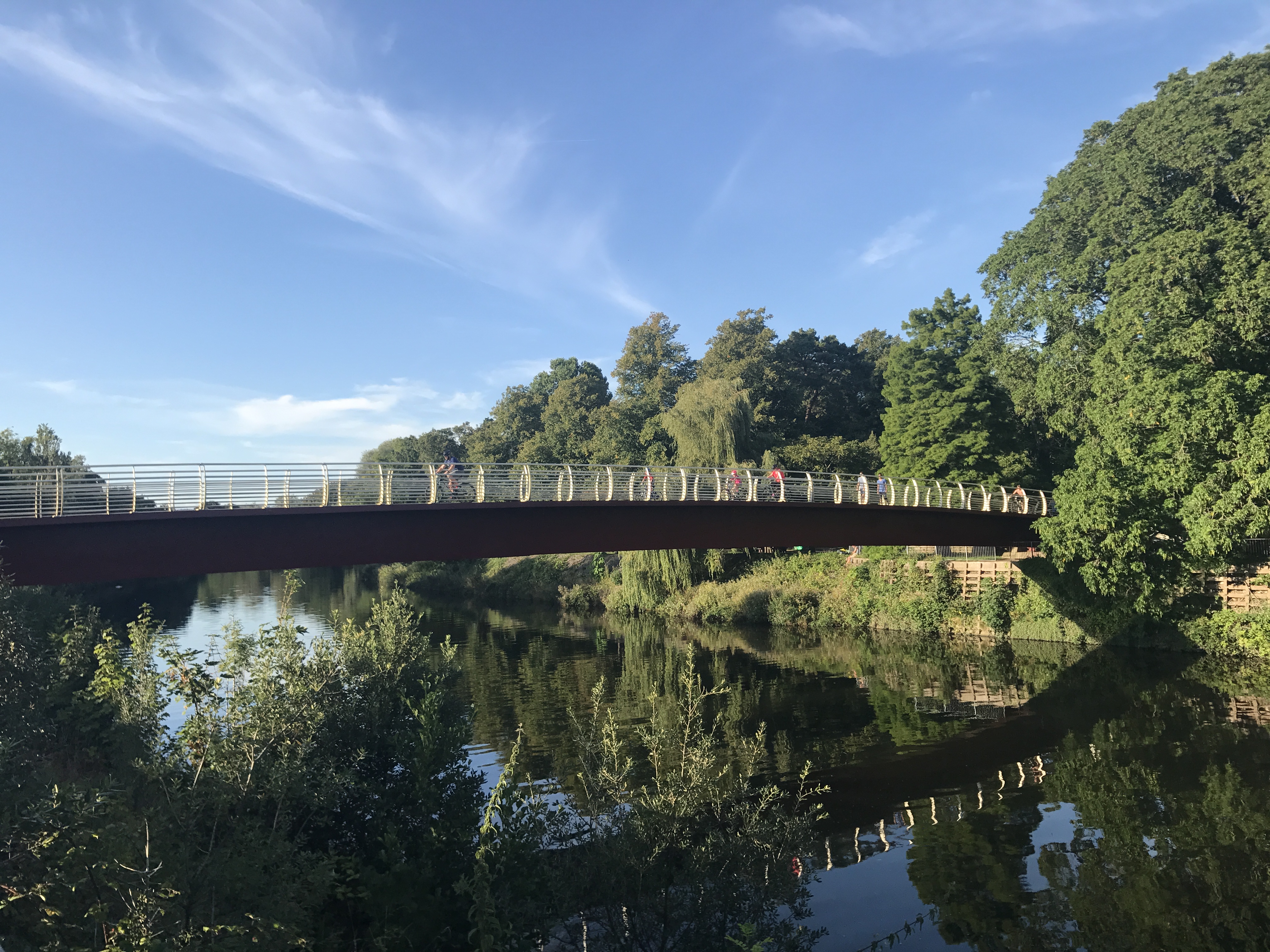 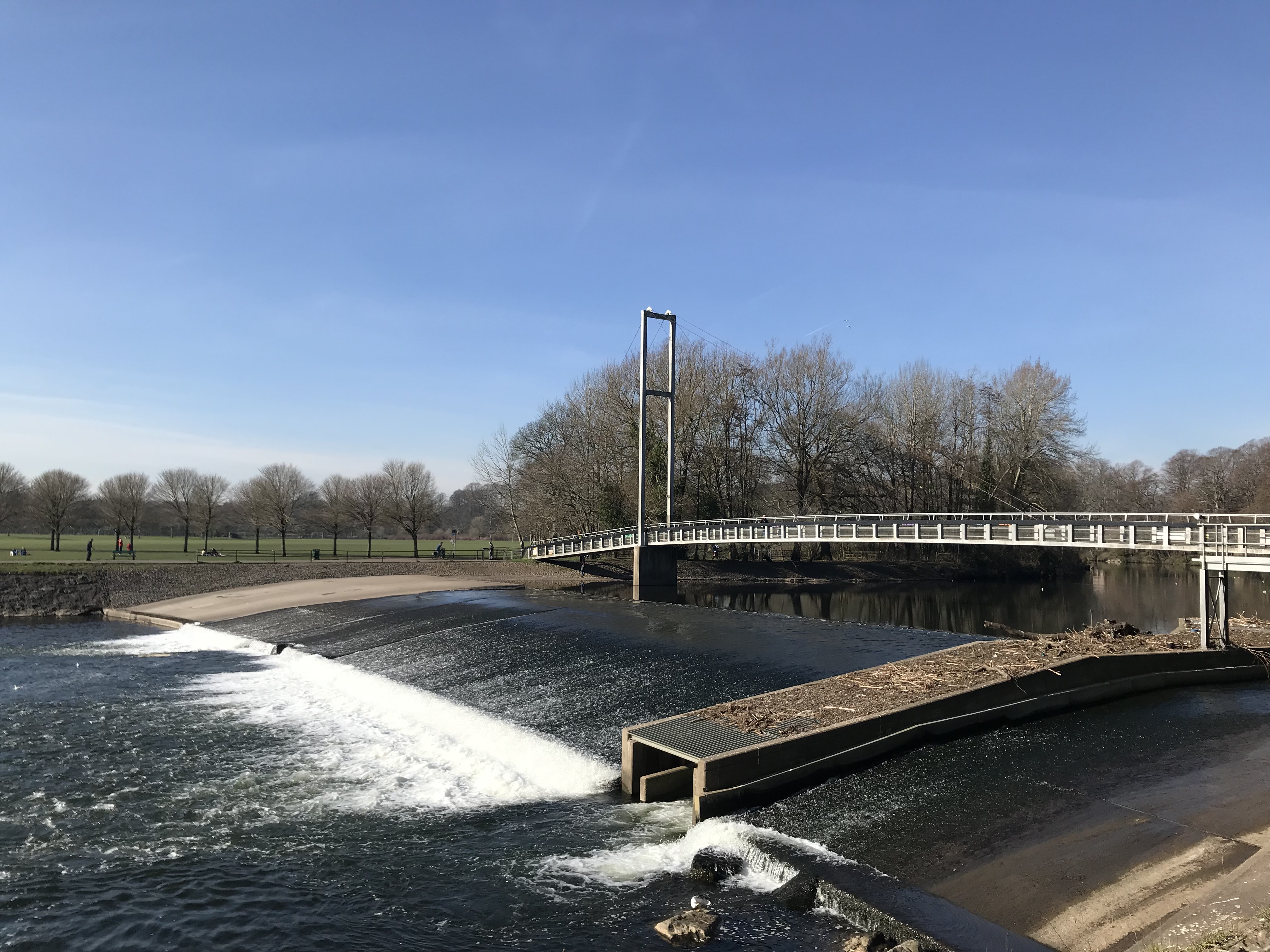 They’re officially called Cardiff Bridge and Blackweir Bridge – although we call them red bridge, because its bottom half is red, and wobbly bridge because, well, it wobbles and bounces when you cross it. Cardiff Bridge gives wonderful views of the Taff and the Principality Stadium, while Blackweir Bridge is a 75 metre long suspension bridge over the Taff built in the 1980s by engineering students from Cardiff University.

The fallen tree at the Secret Garden café area

This whole area is beautiful. The distinctive red brick walls hide the Secret Garden, which is home to the nurseries, where the plants and flowers for all Cardiff’s parks and city centre planters are grown). The Secret Garden Café is a great place for drinks and snacks, while the visitor centre home to toilet facilities as well as information and maps and trails. 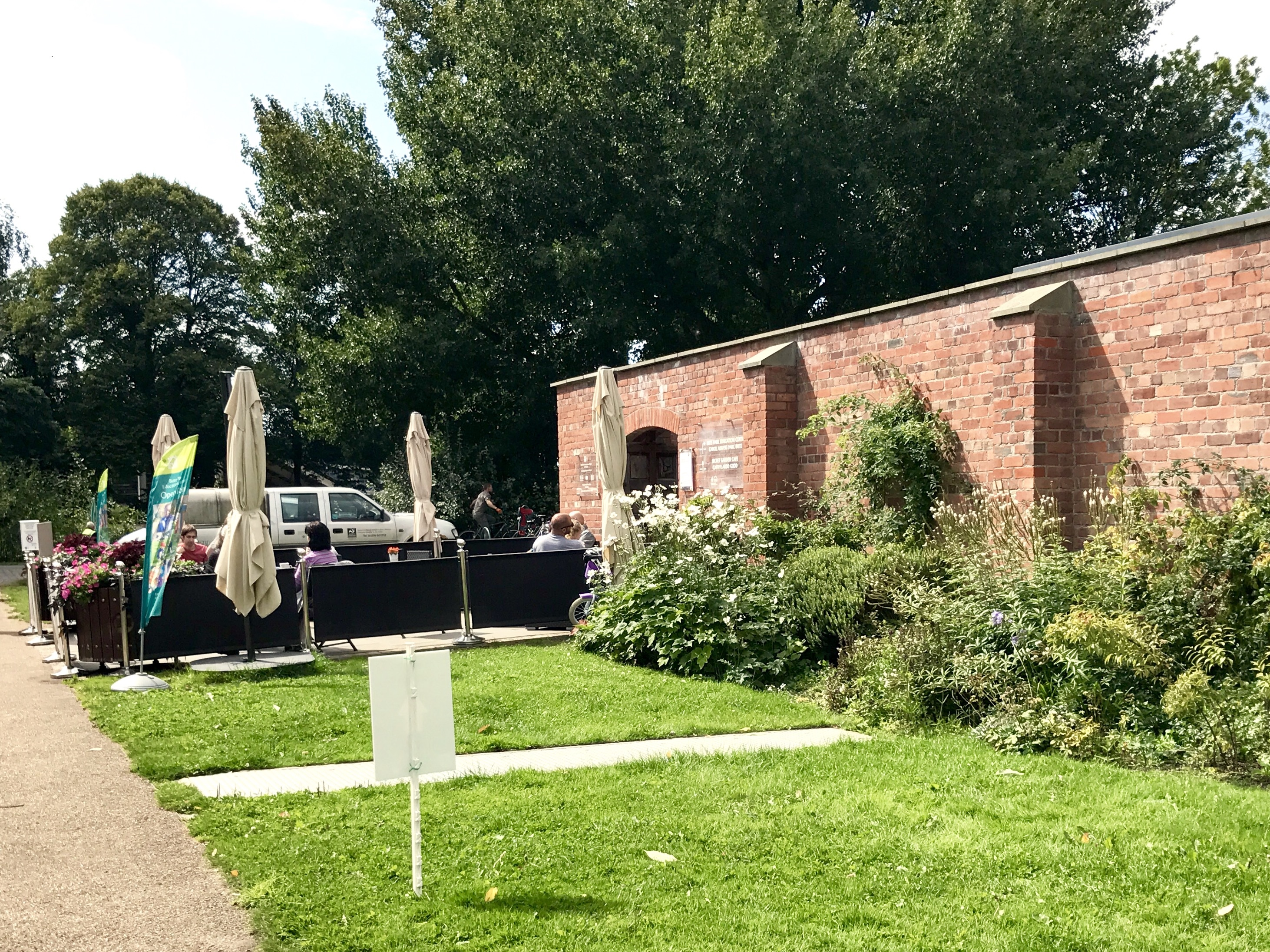 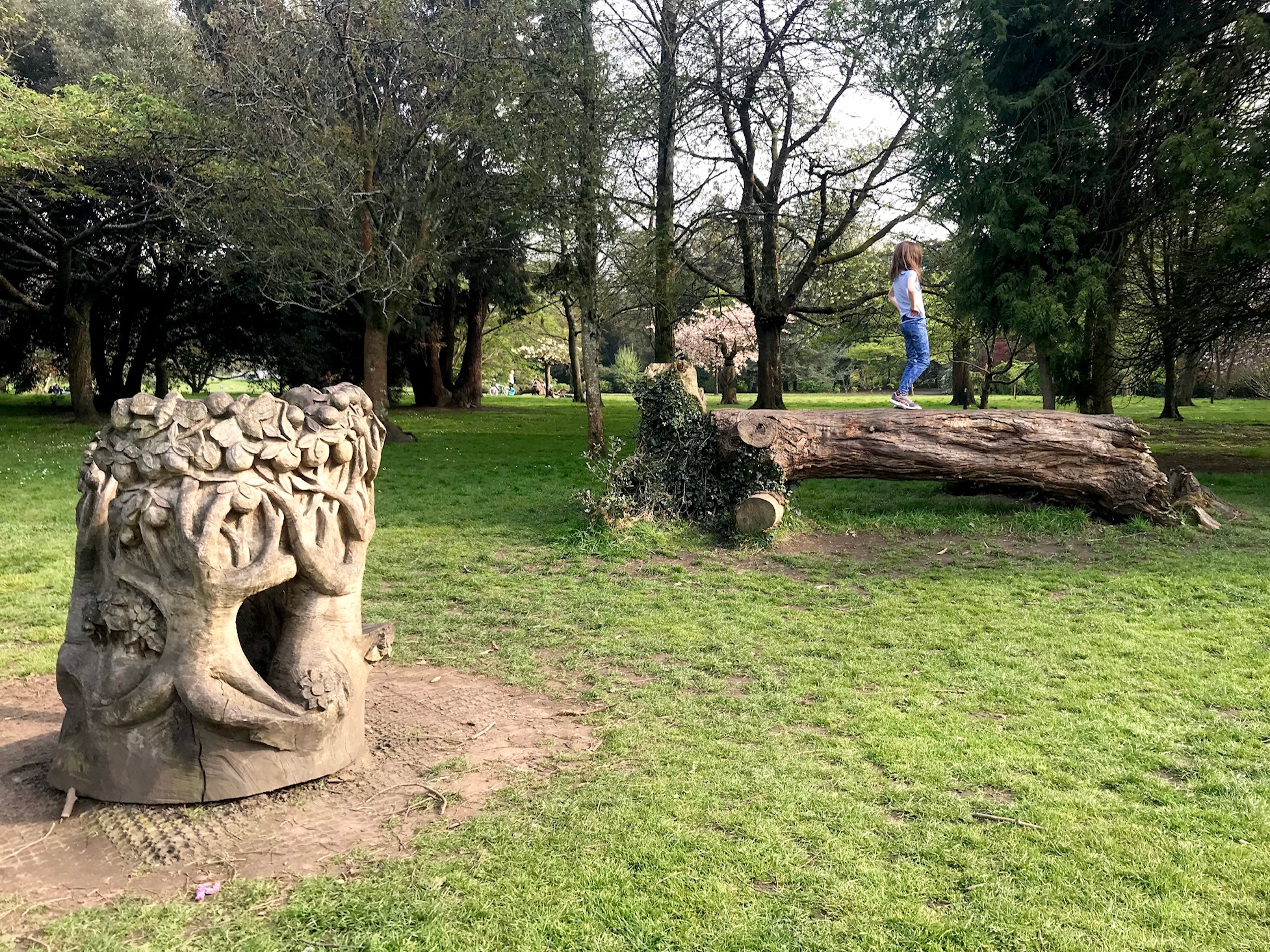 The trees in front of the Secret Garden are one of our favourite areas, perfect for climbing and hiding. Each tree has its own characteristic – one you can stand inside the trunk; another you can sit on its curved bow like a mini hammock.

We especially love the remains of this tree – which was blown down during Storm Imogen in February 2016. We saw it a few days after when it had half fallen and was cordoned off to the public because it was balancing on another tree and could come crashing down at any moment (you can read more about that trip to Bute Park here). It’s since been made safe, with the trunk now making a perfect natural climbing frame, much loved my many children, including my own

The tree with the amazing bough 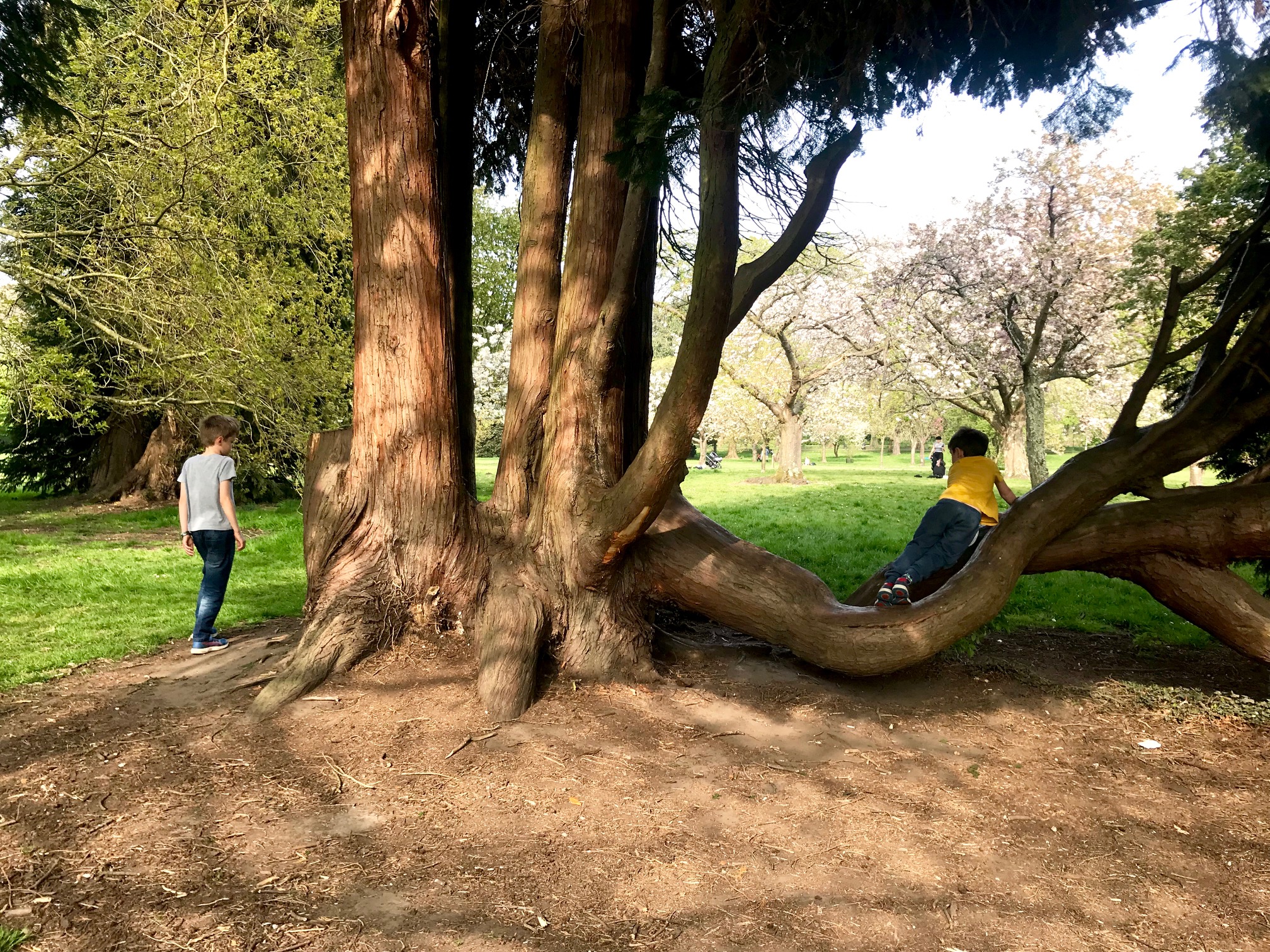 If you’ve followed Cardiff Mummy Says for a while, you’ll know this is my favourite tree ever. Yes, I am the kind of person who has a favourite tree! Not far from the Secret Garden Café, its low swooping bough is perfect to climb on or to perch upon for family photos. There’s also an extra tree stump next to the main trunk which, for as long as I can remember, my children have called the squirrel tree where they create little ‘meals’ for the squirrels made out of fallen leaves and flowers, twigs and whatever else the can find. We have so many family photos taken on this tree. 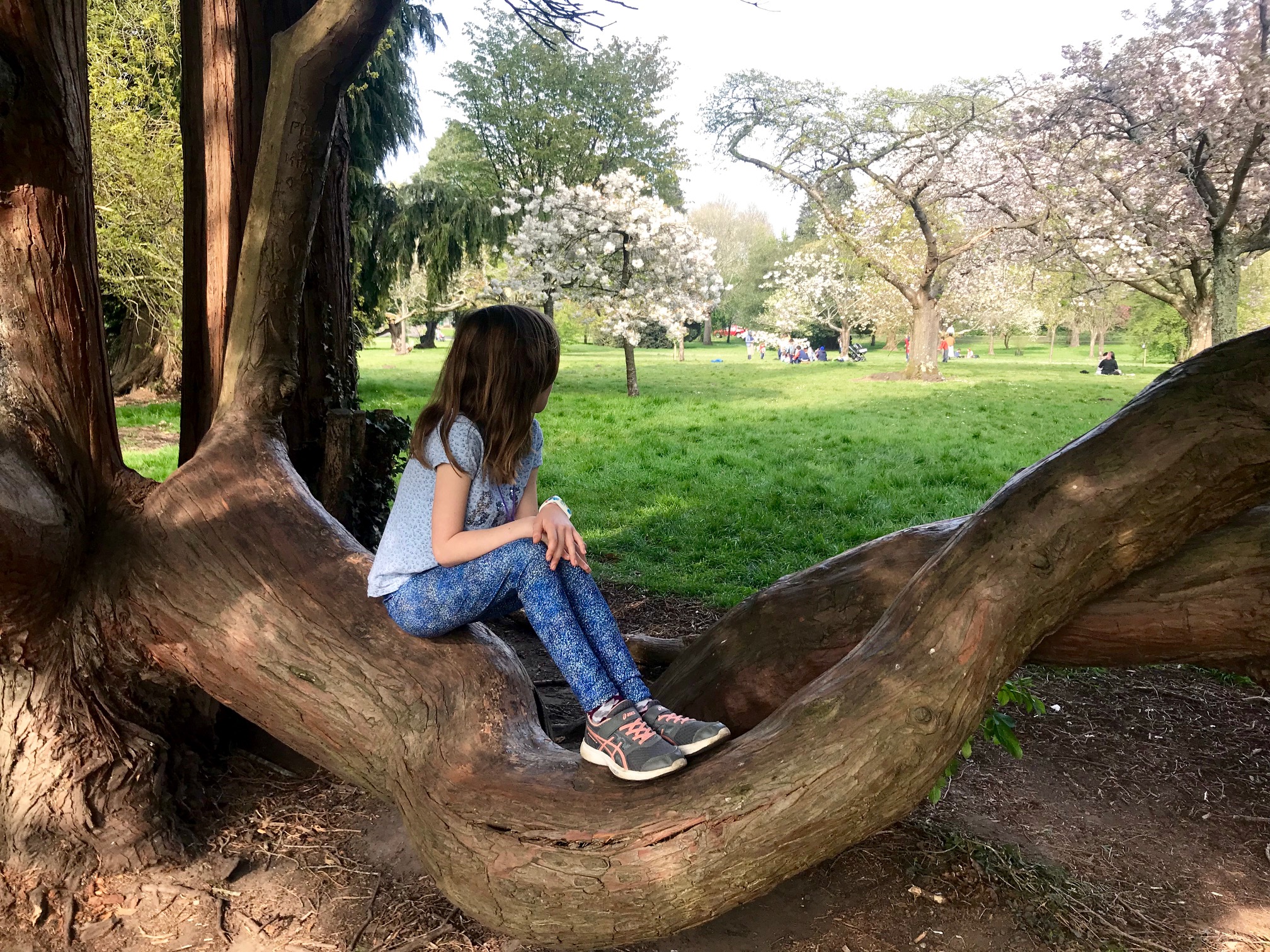 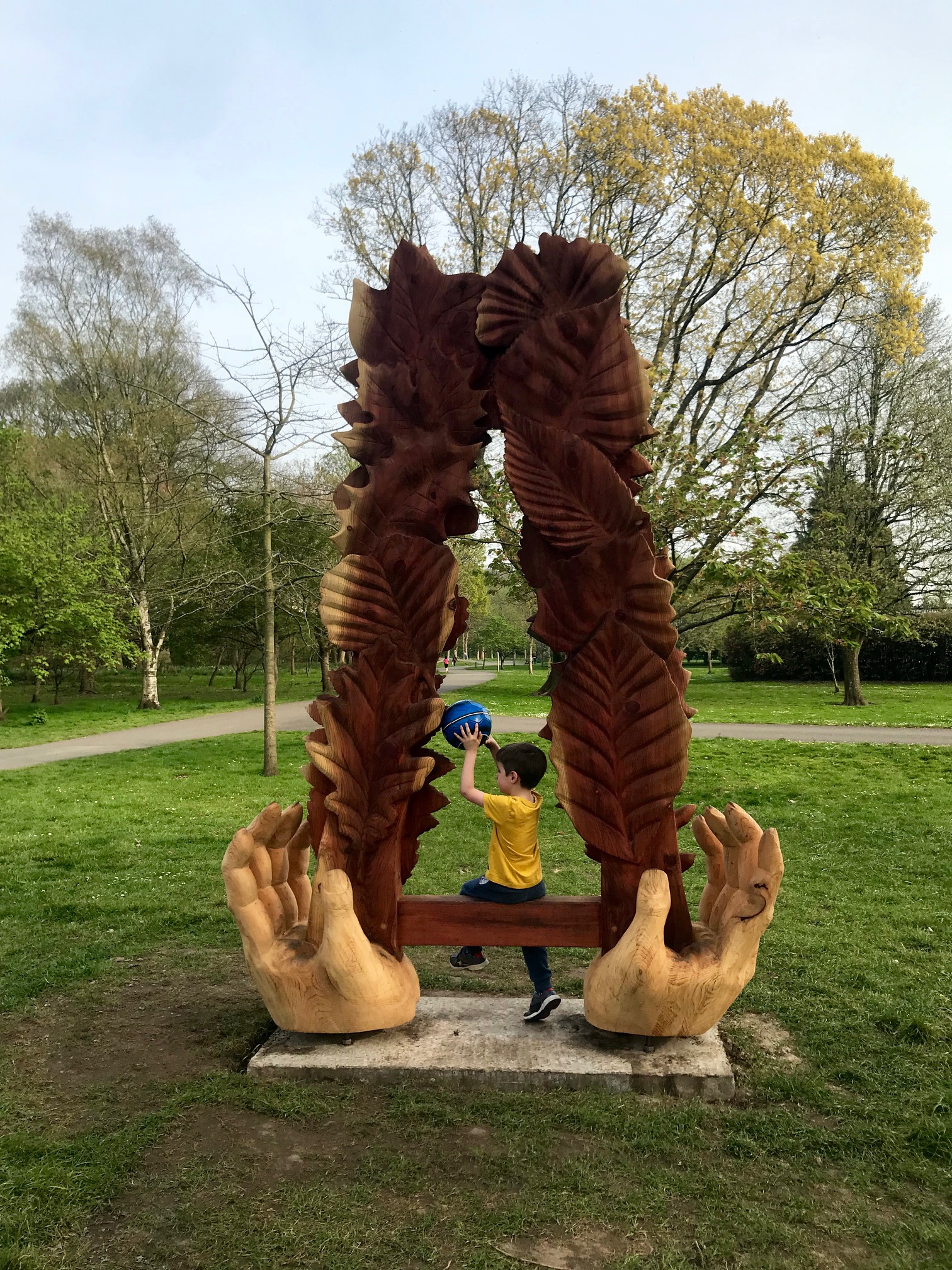 This March saw Bute Park celebrate its 70th anniversary of being open to the public with the unveiling of a new sculpture. Created by Chris Wood, the sculpture sees intricately carved leaves sitting in two giant hands. The leaves represent 20 different species of trees in the park, with the hands representing those who have grown and cultivated them. It’s a new addition to the park but already becoming a favourite of ours.

The long paths that are perfect for scooters and bikes 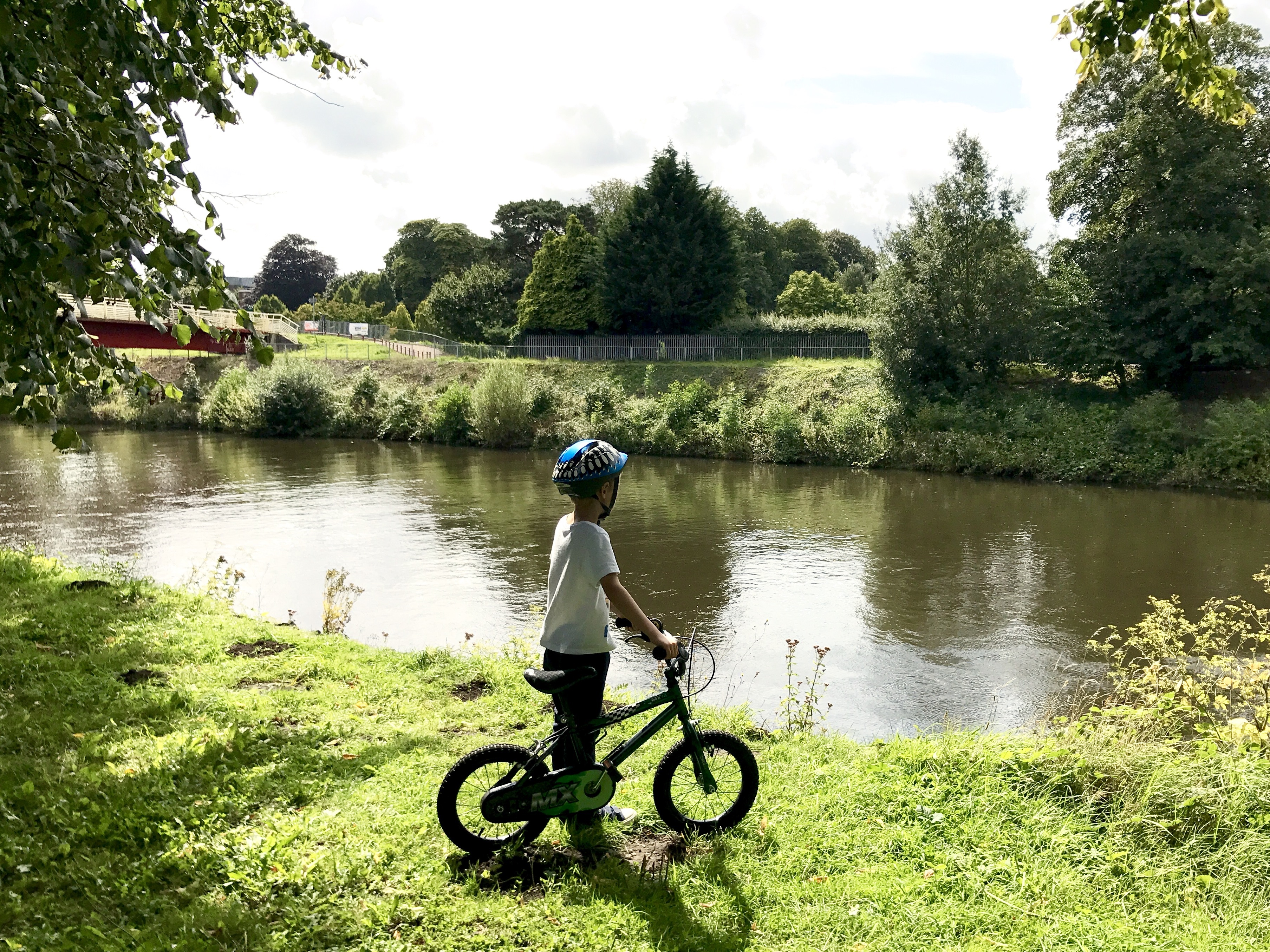 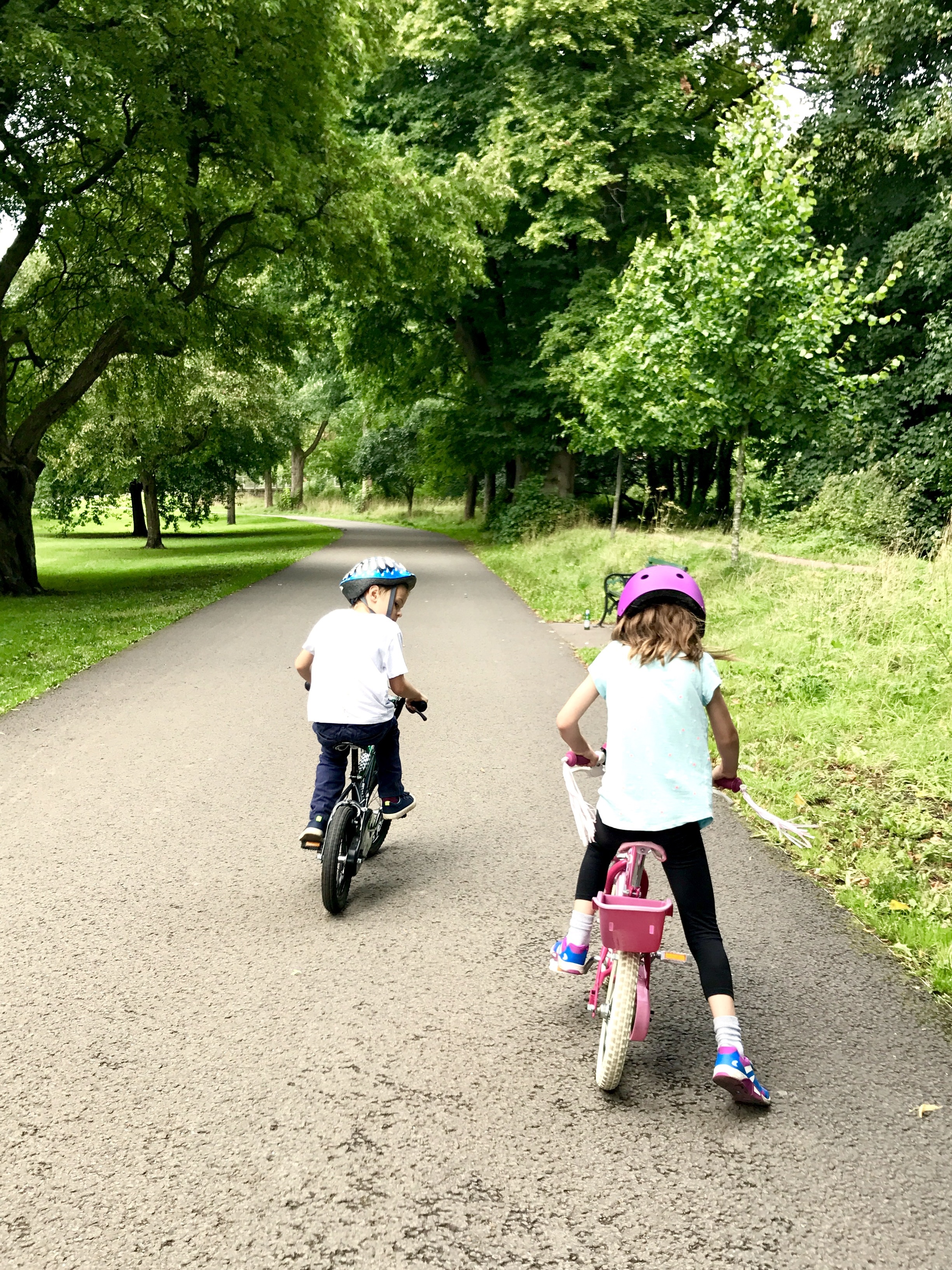 Being on the Taff Trail, the park is hugely popular with cyclists – and my children love taking their bikes and scooters here. The long wide paths are perfect. We particularly like the stretch alongside Blackweir Bridge, which leads to Pontcanna Fields. These two photos are from previous trips to the park.