Even before the curtains open for Peppa Pig’s Surprise at the New Theatre, you can sense the sheer excitement in the auditorium. Everywhere I look, there are babies, toddlers and pre-schoolers dressed in Peppa Pig t-shirts, waving battery-operated glow wands, bouncing up and down on their seats, as parents and grandparents take photos on their smart phones.

Peppa Pig’s Surprise has completely sold out its six-show run over two days in Cardiff. Which is hardly surprising given how well the cheeky little piggy is loved.

The cartoon television series is a staple in the homes of pretty much all young children I know, as are Peppa-related toys, clothes, books and so on. In fact, in 2014, Peppa helped to generate more than $1bn (£640m) in global TV and merchandising revenues. So of course parents are going to jump at the chance of snapping up tickets to see the theatre show in their home town, perfectly timed to coincide with half term.

Peppa Pig’s Surprise follows on the success of Peppa Pig’s Big Splash, which has been touring the UK for the last two years, including Cardiff, which we also attended. The new show opened earlier this week and Cardiff is only the second destination on the tour. It replicates much of the winning formula of the previous show – plenty of audience participation, singing and dancing, scenery that looks like it has come straight out of the television, a fast-paced plot.

And, just like last time, my children absolutely loved it. I had wondered whether Little Miss E, who is coming up for six, would be a bit old. But she and her two younger brothers, Little Man O, just turned four, and Baby Boy I, 19 months, had a great time. All three of them were up dancing and clapping along with huge smiles on their faces. 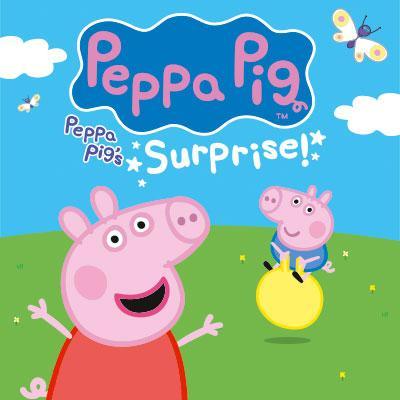 The show opens with Daisy (played by an enthusiastic and bubbly Emma Grace Arends) – an actual girl, rather than an animal – searching for Peppa and her friends. My children didn’t question her presence. She’s not a character from the TV show, but she provided a good bridge between the audience and the characters. These are all child-size puppets moved around by actors dressed all in black, aside from Mummy and Daddy Pig, and Mr Potato, which are actors dressed in life-size costumes.

As Daisy searches for Peppa, George and their friends among the trees and bushes on the stage, the children were yelling with all their hearts “she’s behind you” and “over there”, jumping up and down and pointing. It’s an age-old panto/theatre trick, but it never fails to work with children.

Before long we’re singing The Bing Bong Song, famous from the cartoon. Words are held up at the side of the stage – not that anyone needs them. There’s also a play on the call and response song We’re Going On A Bear Hunt in the form of We’re Going On A Puddle Hunt, before the cast are jumping up and down in (pretend) muddy puddles. Thankfully, this year the audience aren’t asked to jump in puddles too, because as anyone who attended the previous show will know, it felt like the balconies at the New Theatre were going to collapse with all the jumping! 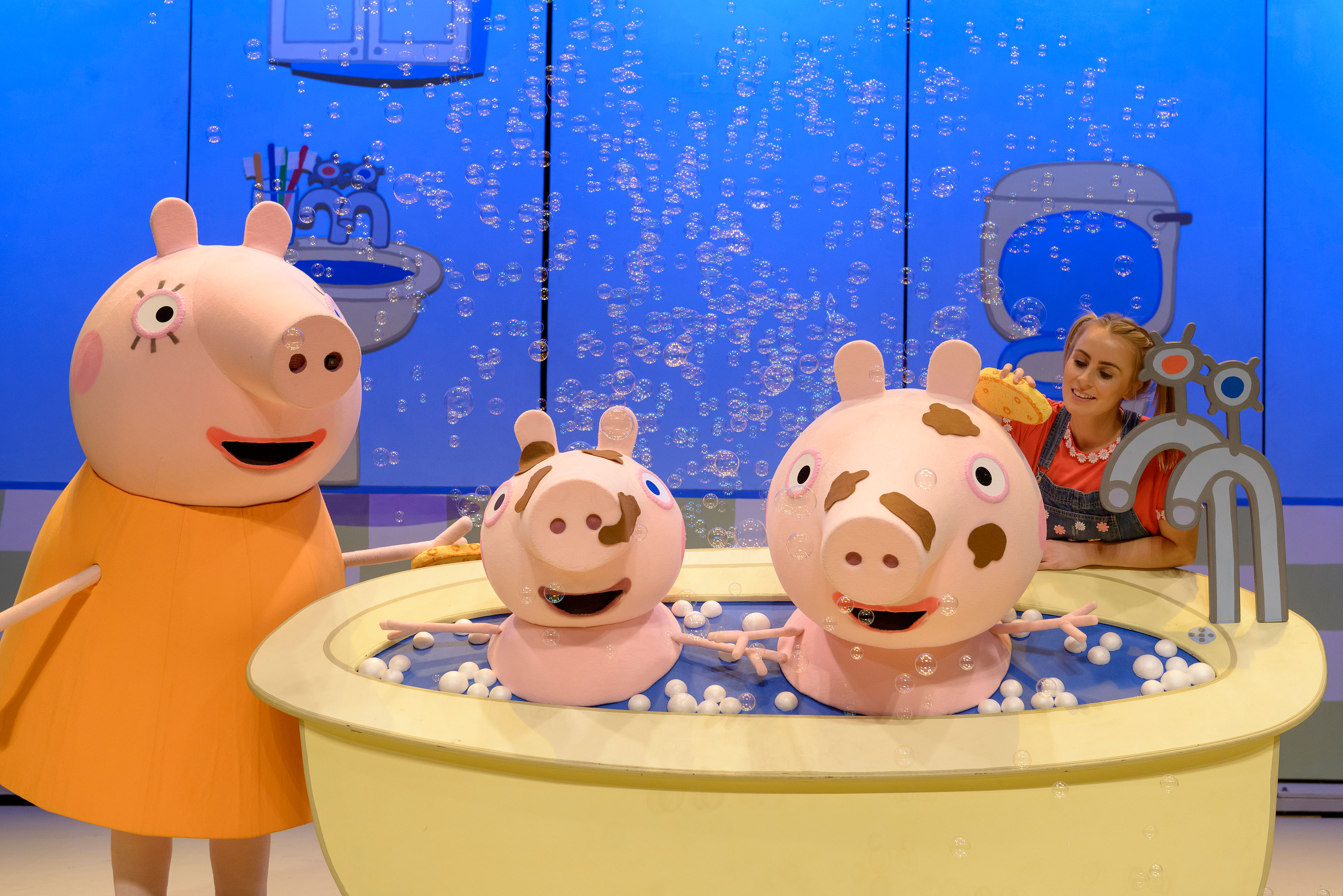 The action soon moves inside into Peppa’s house, to the bathroom, where we have fun blowing bubbles, and Peppa and George’s bedroom for bedtime stories. My children loved how much the house looked like the TV show and it really was such a faithful recreation.  The first act closes with Peppa and George going to bed ahead of their surprise day out the following day – a trip to the seaside.

But this being Peppa Pig Land, the car breaks down on the way. When they finally get there, Daddy Pig has arranged for all Peppa’s friends to be at the beach as part of the surprise. Sandcastles are built, Daddy Pig is buried in the sand and falls asleep, and Mr Potato randomly turns up to make everyone smoothies.

The show is so fast-paced it can’t help but hold the attention of the children in the audience and they are only too keen to join in with all the singing and dancing. I heard more than one grown-up say on the way out that they had a headache, and yes, it was loud – but you only have to look at the delighted faces of the children around you to see what a magical, special experience this is for them.

The show is one hour and 20 minutes, including an interval of around 20 minutes. Personally, I would have rather the performance run straight through, as has been the case most other children’s theatre productions we have seen for this age group. Getting the children back to their seats after the break was slow going, which meant the second act started back and finished later than planned. Timing is everything when you have young children, especially as this was the 4pm performance and parents were probably anticipating meltdowns from tired and hungry little ones needing their tea and their bed. A lot of families around us left before the end, which was a real shame and can’t have been very nice for the cast.

Perhaps they were keen to get to the front of the buggy park queue too. If you are planning on seeing the show in Cardiff, it’s worth knowing there’s likely to be a bit of a queue to collect buggies from the cloak room at the end. It’s brilliant that the New Theatre has a free buggy park available, but the difficulty with it being such an old-style theatre is that the cloak room area is down the stairs and it can be difficult to get a buggy plus child/children up and down the stairs. I’m very grateful to the other audience members who saw me struggling on the spiral stair case and who helped me, both at the start and end of the show.

Minor gripes aside though, Peppa Pig’s Surprise is brilliant fun and my children loved it. Yes, it’s a commercial show, which I know some more traditional theatre-goers might look down on – but anything that can bring sell-out audiences of youngsters to a theatre and leave them wanting more is, in my opinion, a good thing. It can be quite daunting for young children to visit the theatre for the first time and so many parents tell me it is something they are apprehensive about, so watching a familiar and well-loved character in a new environment is the perfect way to introduce them to the idea of live theatre. This is a fun, lively and engaging show perfect for young children and their families.

Final word must go to Little Miss E and Little Man O though. I asked them both separately what their favourite part of Peppa Pig’s Surprise was. She said “all of it” and he said “everything”. And I’m sure if Baby Boy I had the vocabulary, he would agree wholeheartedly.

Peppa Pig’s Surprise is extensively touring the UK for the next year, with more dates still to be announced! For more information, see the website. Have you seen the show, or are you going? Do let me know in the comments section below, on the Cardiff  Mummy Says Facebook page or you can tweet me on @cardiffmummy

We were given tickets for the performance in return for a review.