“Tell me honestly,” you said. “What is it really like having three children? I know you always wanted three, and you say you love it, but what’s it really like?”

“I do love it,” I replied. “I absolutely love it. But… my house is never quiet, it’s never tidy and I rarely get a moment to myself. It’s chaotic and crazy – but wonderful.”

I know having a third child is on your mind right now. It’s a big decision and one I know you won’t take lightly. So I will be utterly truthful with you. This is what it’s like for me, as I approach almost three years of being a mum of three.

My three are now 7, 5¼ and 2¾ and were born in just over four years. When number three came along, my first was four and a quarter, and my second two and a half.

For the first six months of their lives, my eldest was still a preschooler, so all three of them were home with me. Previously, the eldest two had been at a private nursery when I worked, but when number three came along, we couldn’t afford £80+ a day on childcare. My husband had just over a week’s paternity leave from work – and then that was it. Just me and the little people.

I adored those early days though, every day of the week hanging out with my little gang.

Some days were a struggle to get out of the house – getting everyone up and dressed, teeth cleaned, shoes on, baby fed and nappy changed. Some days we didn’t leave the house. But mostly we went out to soft play, toddler groups, the park and gymnastics. I loved seeing them interact with each other and that sibling bond develop.

In some ways, going from two to three was easier than one to two. When my second was born, my eldest wanted me to play with her all the time, whether I had a baby on my boob or not. When number three came along, the eldest two had each other to play with, so it made it easier to look after the baby. 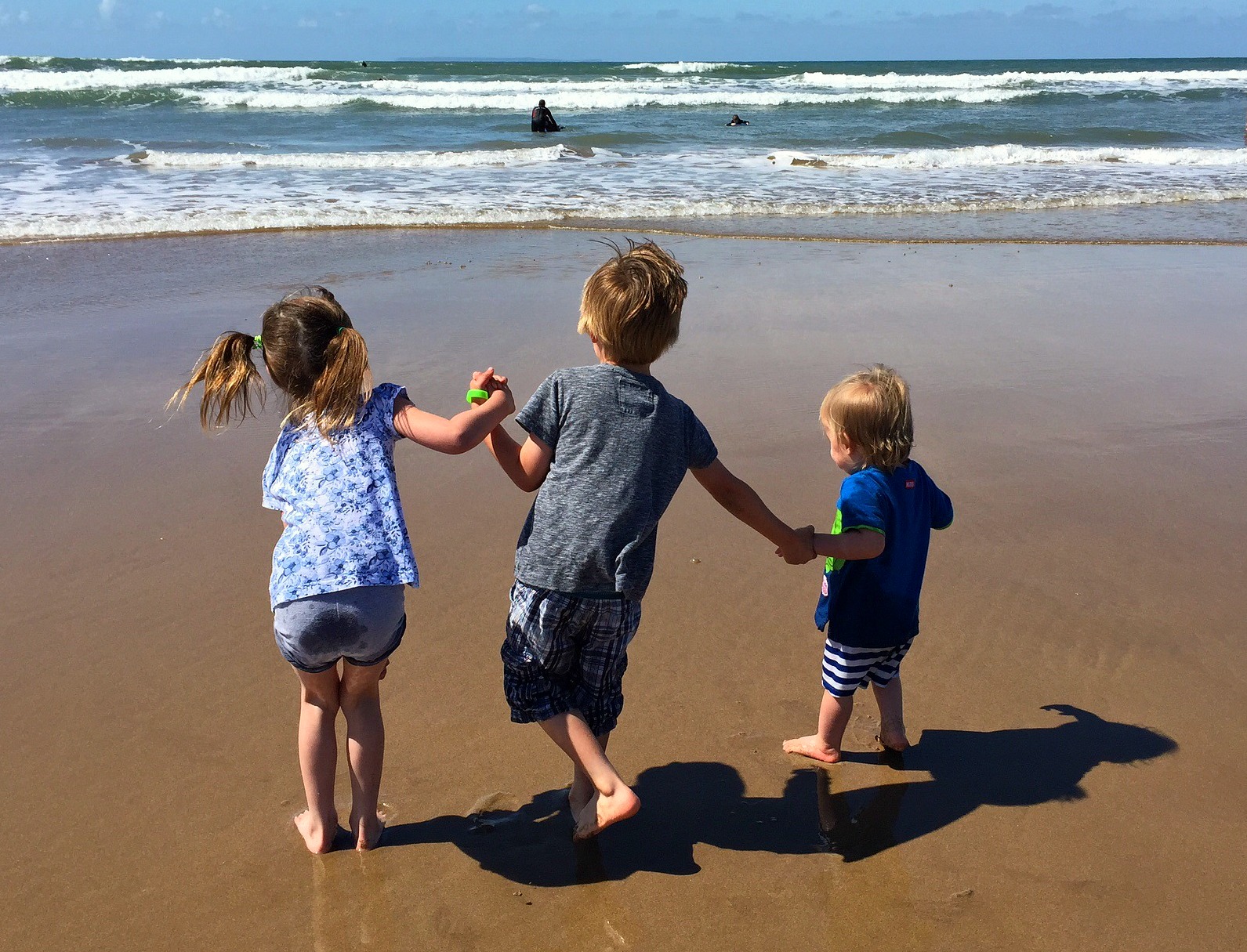 My first baby’s nap times were sacred. But right from the beginning, number three found himself sleeping on the go far more than would be ideal. His lunch-time nap coincided with his big sister’s drop off at afternoon preschool and while baby slept, I’d try to focus on one-to-one time with my middle child.

I felt guilty that number three didn’t go to any baby activities (neither did number two for that matter). But he didn’t know any different. Sometimes I think he thinks he’s a big kid – his confidence and skill at gymnastics and scaling the big kids’ playground at the park is impressive.

I have friends with three children but the eldest two were already at school or preschool so they could go to all the baby classes and so on.

When my third was six months old, his big sister started school full time and his big brother started at a playgroup two mornings a week. Suddenly I had time with just him. It felt so indulgent, so easy with just one, but so quiet too. I missed the other two so much. 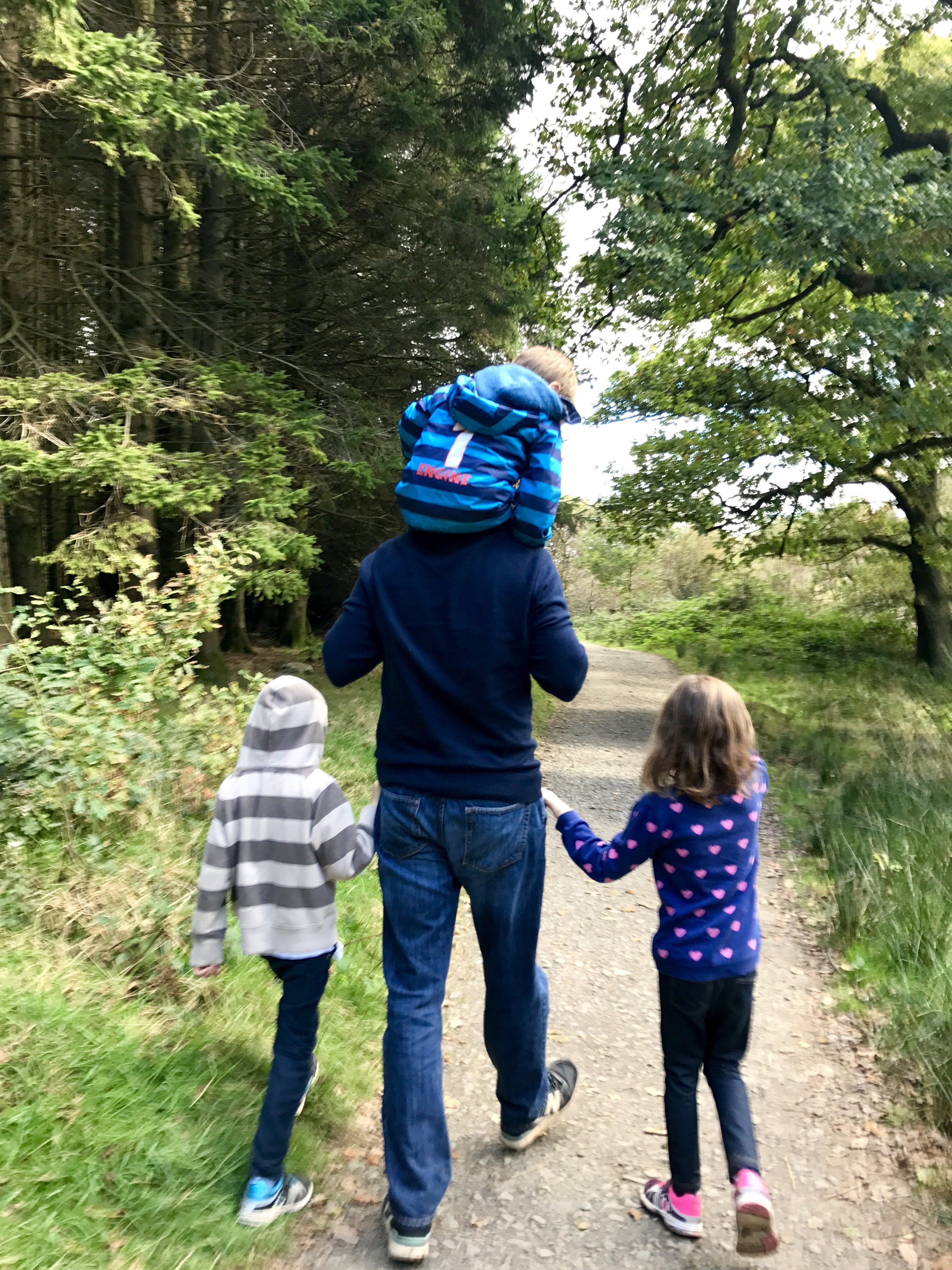 We started a lovely baby class but whereas the other mums would go for a coffee and a catch up afterwards, I was always clock watching and rushing off to pick up number two child. The other mums would say it had been a struggle to get there for 10 with their babies napping, feeding, needing nappies, whereas I’d already dropped off at school, preschool and usually run some kind of errand en route, because it’s so much easier to do all of that with one than it is with three. You can’t say all that to the new mums though; we were all first time mums once upon a time, suddenly responsible for a tiny little being, wondering what on earth we were doing and how impossible it felt to leave the house before midday.

I also found little things didn’t stress me at all third time round. First time mums are more concerned with milestones and knowing exactly what their baby should be doing at each week. The mums in our baby class knew how much their babies weighed, how much they had gained from the previous month, what percentile they were on. I did too with my number one, less so with number two, but not a clue with number three. Part of me felt guilty, part of me wondered why I ever obsessed so much about these things first time round.

I found it lonelier third time round. It sounds silly to say when I was surrounded by three kids all day, but my friends would be chattering away at soft play or whatever and I’d be back and forth to the toilet with one and two, dealing with upsets and tantrums, changing and feeding number three. It could be non stop and sometimes I felt I was with people, but not really with them. My days were full of unfinished conversations and utter gratitude when someone offered to hold my baby so I could deal with the other two, or watch the other two so I could deal with the baby.

And then as my friends’ children who were the same age as my first and second went to school or preschool, the number of familiar faces on the preschool scene dwindled. I notice it even more now that I have two in full-time school. Most people are back at work or even if they do have non work days their kids are at school and soft play is the last place they want to be. I see gangs of mums with babies, or toddlers and newborns/baby bumps chattering together and think ‘that used to be me’. I worry my toddler doesn’t have as many friends his own age as his siblings do. But he loves playing with their friends. He seemed to bypass the toddler toy stage, preferring what his siblings were playing with.

Life is inevitably more expensive with three. Childcare for three, for starters. My husband and I made the decision as a family that I would scale back my freelance work and do what work I could in the evenings. Otherwise I’d pretty much be working just to pay people to look after my kids, and with the added stress of having to drop off and pick up at three different places, plus coordinate holiday childcare. It was tiring at times, but I felt so lucky to have so much time with my children when they were little. 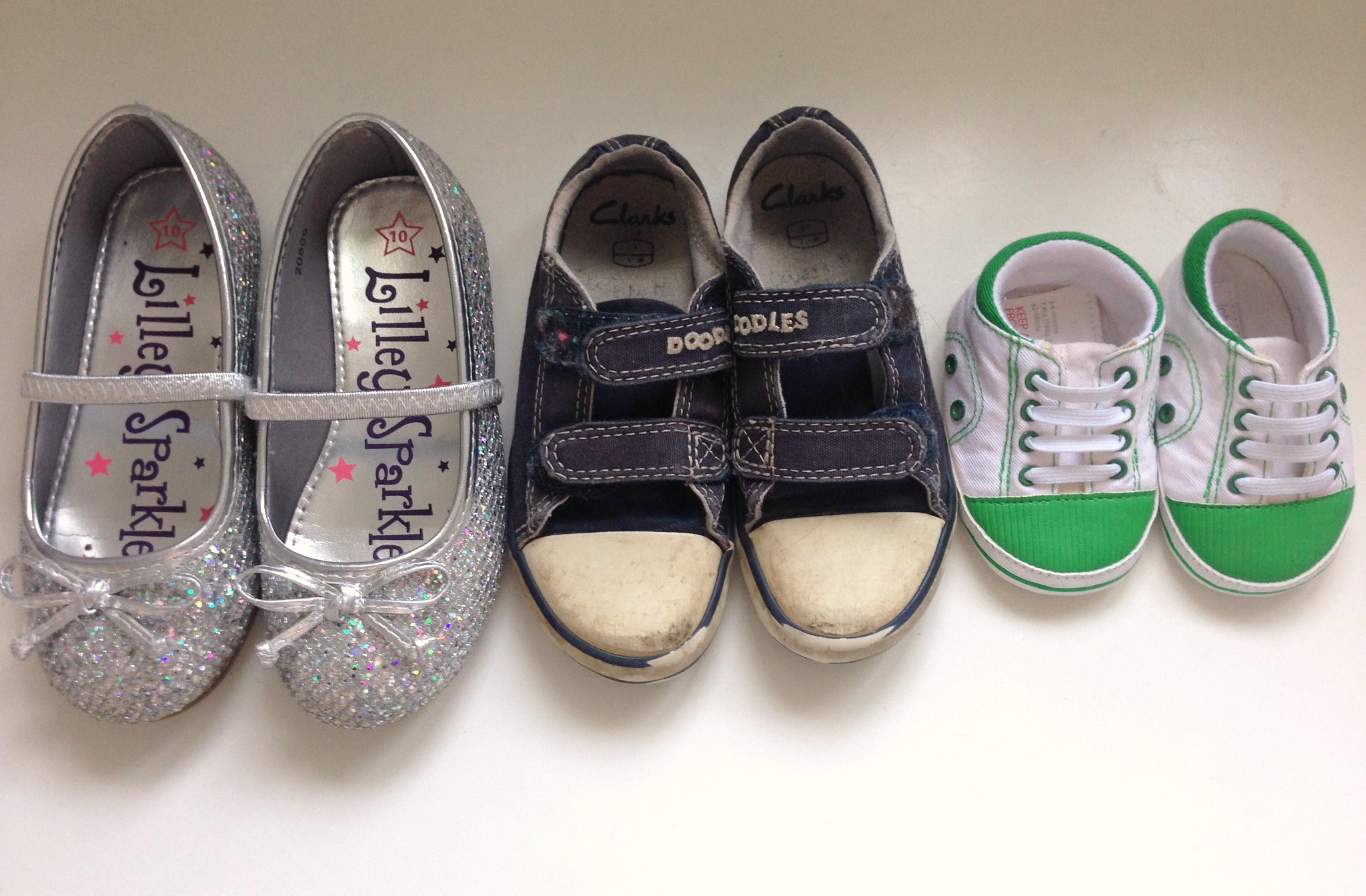 Holidays and days out also cost more when you are a family of five – most places are geared up to families of four. But these are only special occasions and it’s something we’ve accepted it. It’s always a bonus when a family ticket at an attraction admits two adults and three+ children. As a family, we have always embraced free attractions locally and beyond anyway, so it doesn’t affect us too much on a day to day basis.

What I do notice daily though, is the washing and the housework. There is so much of it! It seems constant in fact. I never quite feel on top of it.

There’s a lot of arguing between the three of them. Interestingly, number one and two fight, number two and three fight, but one and three don’t.

But then, as with most siblings, they are worst of enemies but best of friends too. They make up the most wonderful little games, with rules only they understand. The big two help the youngest with things. He adores them and they adore him. I hope they always keep that closeness. I’ll certainly do my best to encourage it.

One thing you learn to deal with when you have three children is other people’s unsolicited opinions on your family set up.

“I couldn’t think of anything worse.”

“You’ve got your hands full.”

In fact, I wrote about that here and here.

My youngest is two months away from turning three and – dare I say it – I think things are starting to get easier. He doesn’t need so much help with things. The three of them play nicely together (sometimes!) and I think because they are fairly close in age, they still enjoy a lot of the same things, which makes choosing activities easier. Two are in full-time school and number three has two school-hour days at cylch meithrin (Welsh playgroup) so I can do a lot of my work on those days and am finally getting my evenings back. I don’t need to take so much out with me when we go out for the day and naps and set meal times are not such a big deal.

Finding one-to-one time with my eldest two if difficult, but something we as a family are working on. I love all the things we do together as a five, but I think it’s important they get to do things just them too.

Sometimes, I look at the back seat of my car and I see their three little faces all in a line and I want to burst with pride at the little gang we have created.

I think of that phrase I hear so, so often, “you’ve got your hands full”, and I wouldn’t want it any other way. Yes, my hands are full – but so is my heart. It is completely overflowing.

And so my friend, as you consider whether to add another little person to your family, my verdict on life as a mum of three? Chaotic and crazy – but utterly utterly wonderful. 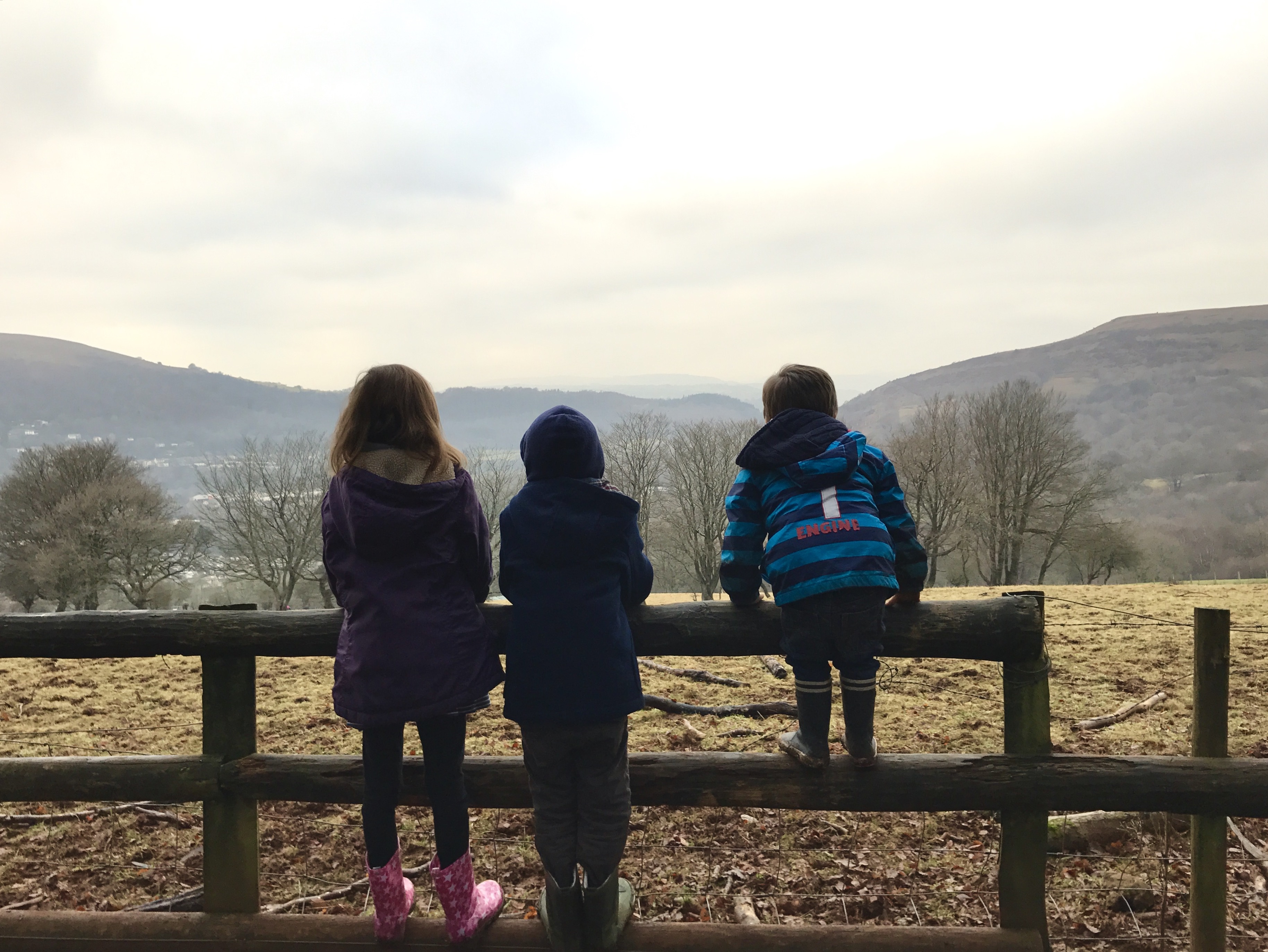 Can you relate? Do let me know in the comments below, on the Cardiff Mummy Says Facebook page of by tweeting me on @cardiffmummy

Homepage » Family life » What’s it really like having three children?

9 Comments to What’s it really like having three children?