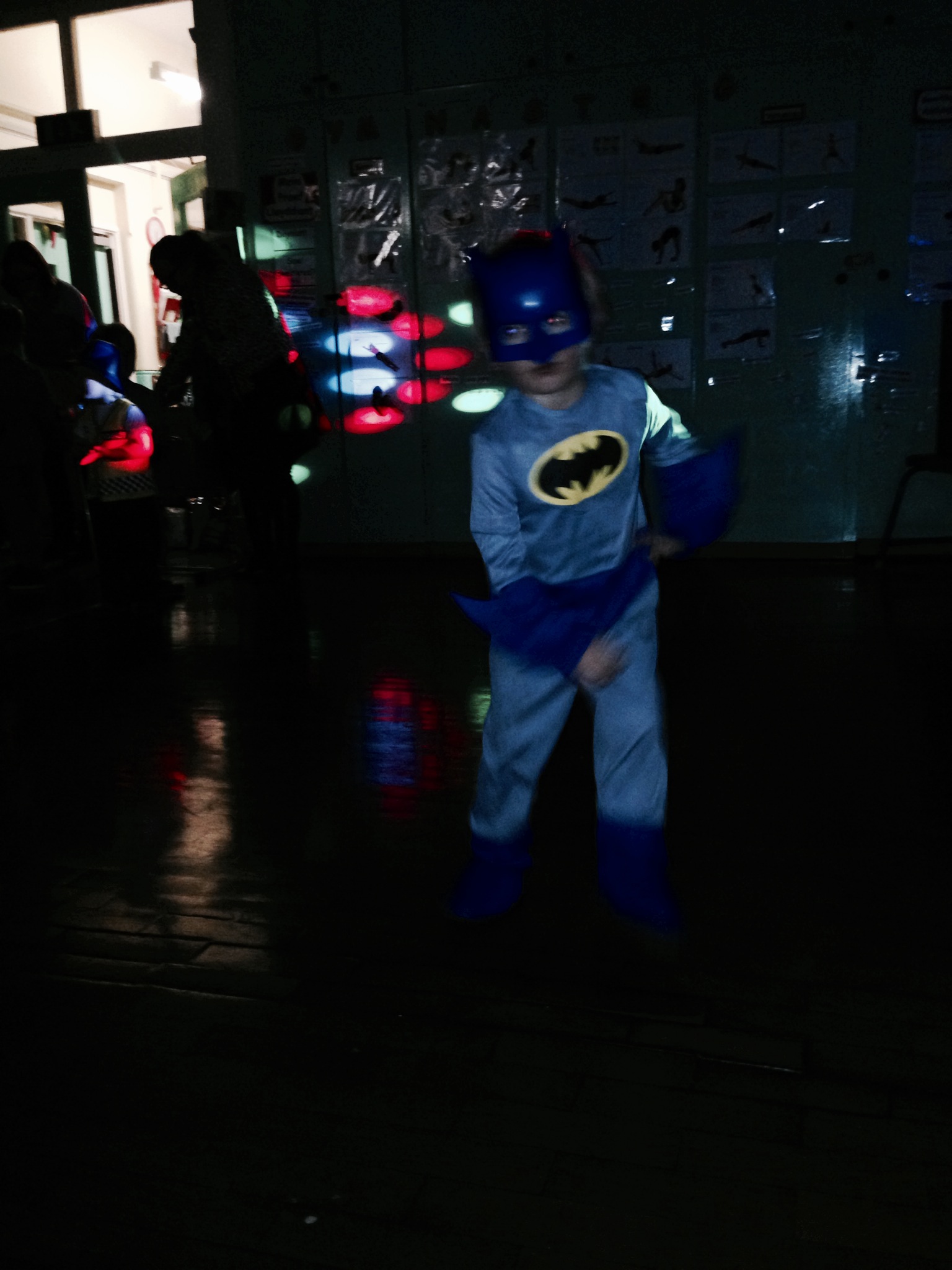 Little O cutting some moves at the school disco

It was Little E’s school disco last Friday  – a Superhero theme to coincide with Children in Need. She thought dancing around with her friends and staying up past her bed time was the most wonderful thing ever. So did her younger brothers, who were lucky enough to tag along with her. Little E and Little O were so excited by the glow sticks, on sale for just 10p each, that I thought they might burst. They bought four each, which soon became their most treasured possession. They placed them next to their beds when they went to sleep that night and played with them in the dark in the morning, refusing to open any curtains. There were actual tears when the glow sticks ran out.

We’ve been to a few discos now. A couple at school and a few at birthday parties. I’ve noticed the same songs playing time and again and it got me thinking about how different the soundtrack of my children’s youth will be to my own. Sure, I play them all my old favourites too, but here’s how their memory playlist is shaping up so far.

You know you’re old when you have never danced to Gangnam Style in a nightclub or grown-up party and are in awe of the six year olds who know all the moves, while you haven’t quite mastered them. They only played this twice at last Friday’s disco. At the end of term summer one, it was on at least four times. For some of the boys, that wasn’t anywhere near enough.

Let it Go from Frozen

Like most girls her age, Little E is obsessed with Frozen. When this song came on, I thought she and her friends were going to self-combust with excitement. They stood in a little circle singing along word perfectly, doing little actions, so happy to be singing it together. It was so cute it brought a little tear to my eye. I think this song will always be special to her when she thinks back to her childhood.

What Does The Fox Say – Ylvis

I find this one, with all its stupid noises, so annoying but it was the top trending video of 2013 on YouTube and, as of October 2014, had 454 million views, so what would an oldie like me know anyway, hey?

Everything is Awesome from The Lego Movie

I never get to see grown-up films these days, but I have seen The Lego Movie and this song, which appears in the film, is so catchy and upbeat. It’s brilliant with a strong message about things being “cool when you’re part of a team”.

This song does exactly what it says on the tin – how can you listen to this and not feel happy? It’s from the Despicable Me 2 soundtrack and kids sure do love Minions.

One Way Or Another – One Direction

1D are the boyband of the day and this was their Comic Relief single from last year. The kids seem to love dancing to this one. There are two topics of conversations among the mums while it’s playing though. 1. It’s not a patch on the Blondie version. 2. Are they hot? Are they not? Is it wrong to even pose that question when you are old enough to be their mum?

Do any of the children dancing to this at school discos even know who Mick Jagger is? Somehow I suspect not, but they have great fun dancing to it in any case. Released in 2011, it’s still big on the kiddie party scene. We hear this one a lot!

I was about nine when this song was released and I was obsessed with it. To this day it remains one of my favourite cheesy songs to dance around to. You have to do the actions for “running just as fast as we can”, “And then you put your arms around me and we tumble to the ground” and “the beating of our hearts is the only sound” though, obviously. Oh, we had no idea what this one was about back then, did we?

My obsession with Tiffany was nothing compared to my love for Kylie. I adored her. Please tell me I am not the only one to still remember the dance routine to this one? Being a Kylie fan, that’s what I preferred doing but it wasn’t long before someone would start a conga-style train and people would start running around the room at top speed.

Livin’ On A Prayer – Bon Jovi

Can you believe this one was released in 1986?! When you were eight, this was rock music at its best. They had guitars and long hair and everything! The only way to dance to this one was in a big circle with your arms around each other’s necks, shouting as loud as you can. “Oh, we’re half way there, oh-oh, living on a prayer.”

You know the one – sleep, wave, hitch a ride…. SuperMan. So bad it’s good. This one doesn’t get played enough these days.

I remember vividly dancing to this in a church hall birthday party when I was about six years old. I honestly thought it was about the YMCA in my home town. I didn’t realise they were everywhere! Wow, there was a time I actually used to willingly dance to this with no alcohol involved.

Who could forget “the mighty jungle” and those chants of “Wimoweh, wimoweh, wimoweh”? I loved this song back in the day. I’ve played it to my children and they think it’s pretty good, too.

Wake Me Up Before You Go-Go

I remember choreographing a whole routine to this with one of my best friends back in the day. In fact, I still remember most of the moves. Despite loving the song, I don’t think I even knew who George Michael was at that point in my life, never mind the controversy he would cause over the years.

When this was released in 1985 I was probably a bit young for boybands (we didn’t grow up so quickly back then!), but I remember thinking this song was brilliant. I still do. I used to have it as my ringtone on an ancient Nokia mobile phone.

What songs remind you of your school discos and which do your children enjoy? I’d love to know.

6 Comments to School disco soundtrack: now versus then