Living in north Cardiff, our regular parks are Roath, Heath and the Rec at Penylan. But yesterday, we headed to the west of the city for a morning at Victoria Park. We’ve been here several times before, but not for a little while, so I thought it’d make a fun Easter holiday morning out for my children.

Built in 1897/8, to celebrate Queen Victoria’s Diamond Jubilee, Victoria Park is a Grade 2 listed park in Canton, retaining much of its period charm, with iron railings, well-kept flower beds and a bandstand based on the park’s original.

We got there at about 10.45am on a dry but cloudy day – and were pleased to see just a handful of other children in the playground. As much as I love seeing children enjoying themselves outdoors, the large playground means it’s tricky to keep an eye on more than one young child when it’s busy, so the fact it was lovely and quiet made life easier for me. 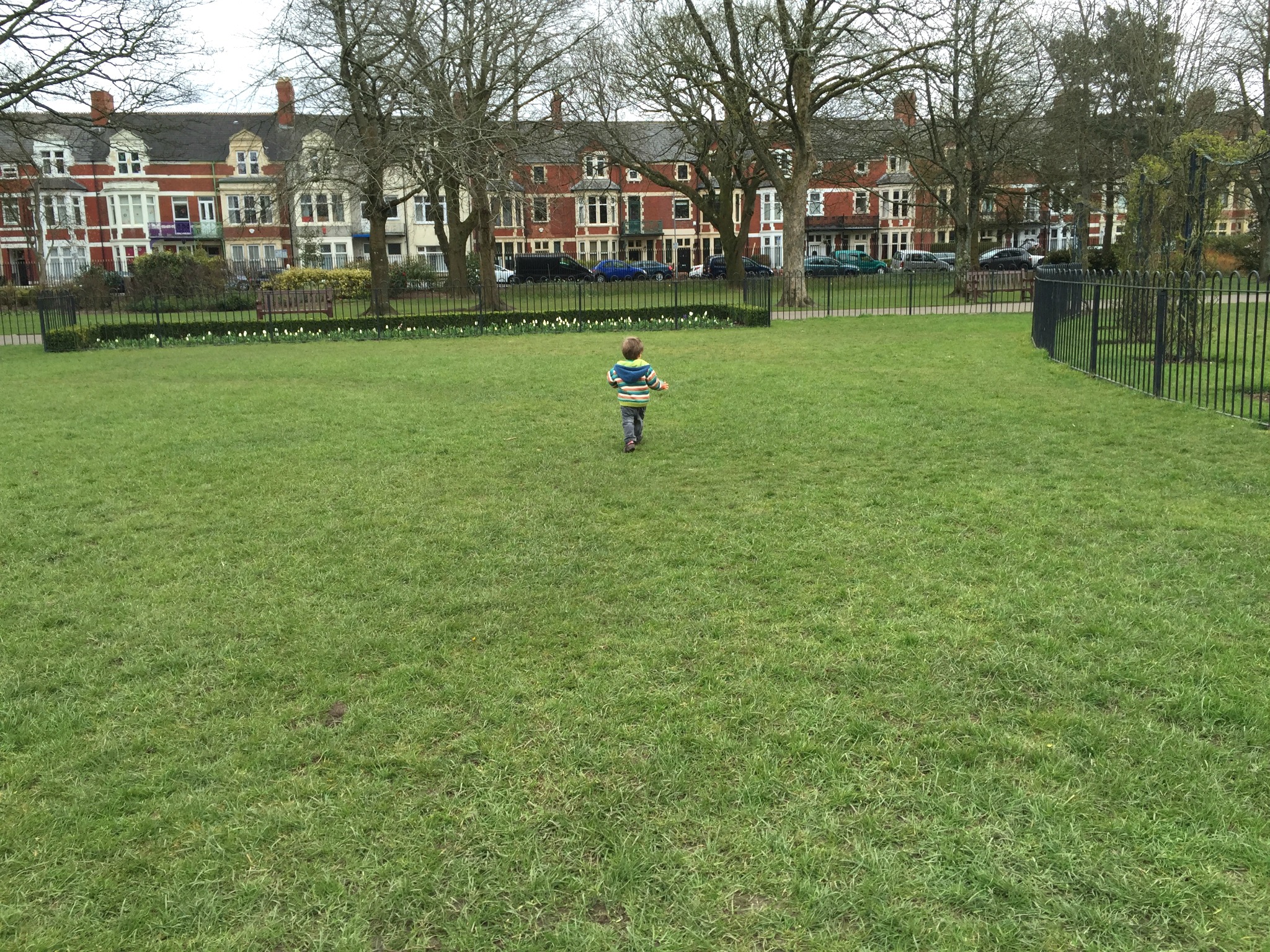 There are two parts to the playground; a large area for children aged seven and under, and a smaller area for over-eights. The swings in the over-eights area are currently fenced off, due to all the building work going on in the park – the splash pool the park is famous for has been bulldozed and a new one is being built in its place, due to open this summer. The building work didn’t really affect our visit – in fact, my children loved watching all the diggers and builders at work. 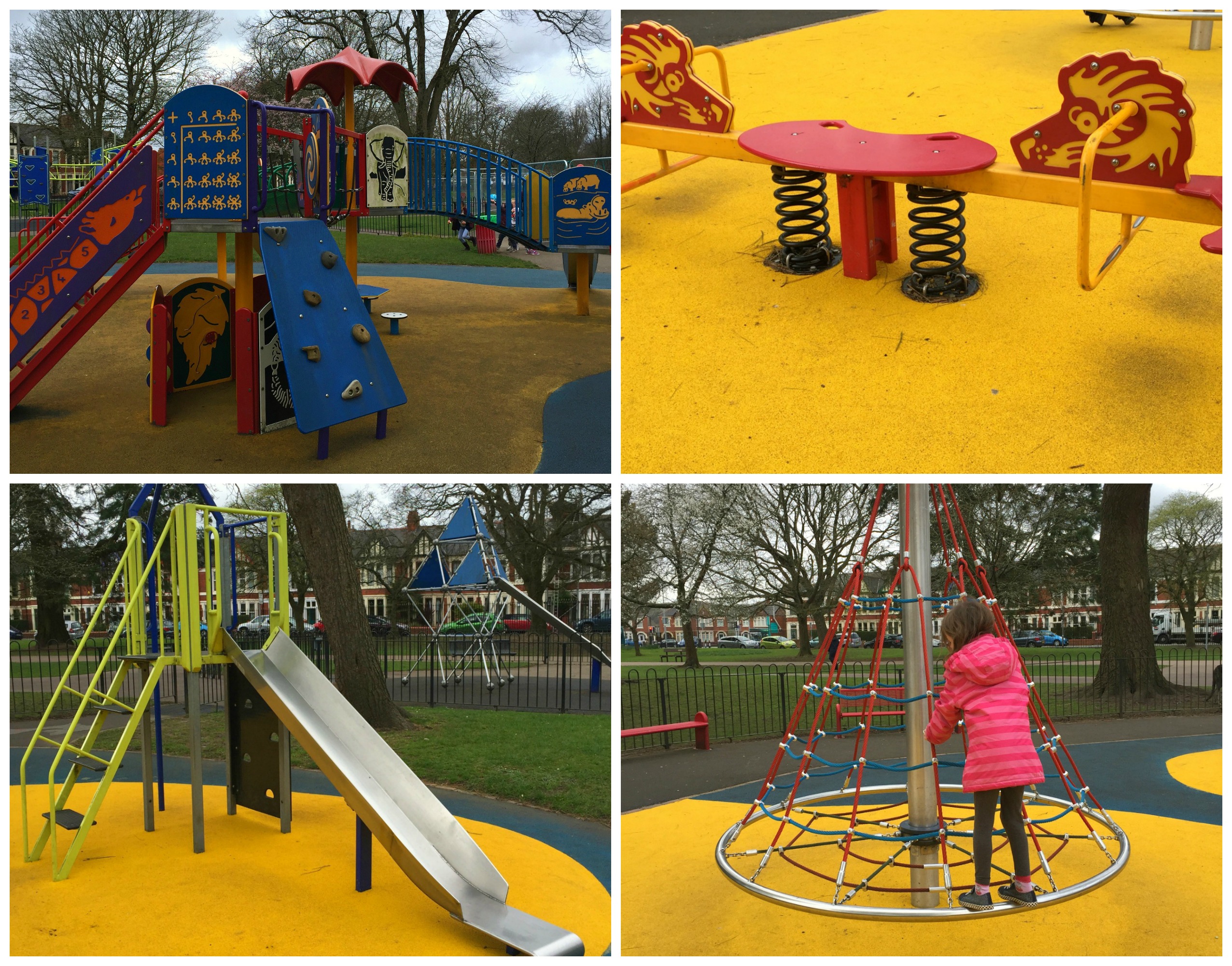 Little Miss E, my six-year-old daughter, and Little Man O, my four-year-old son, loved the zip wire swing. There was no-one else queuing so they stayed on here for at least 20 minutes, taking it in turns on the swing.

Toddler Boy I, my two-year-old youngest child, thought the brightly-coloured climbing frame was brilliant. I was pleased this structure was enclosed enough for him to navigate around on his own, yet accessible enough for me to offer a helping hand when he needed it.

All three of my children enjoyed putting their balancing skills to the test on the little obstacle course, as well as making themselves dizzy in the spinning bowl. My two eldest children also loved the rotating rope climbing frame. It was a good size for their age group. 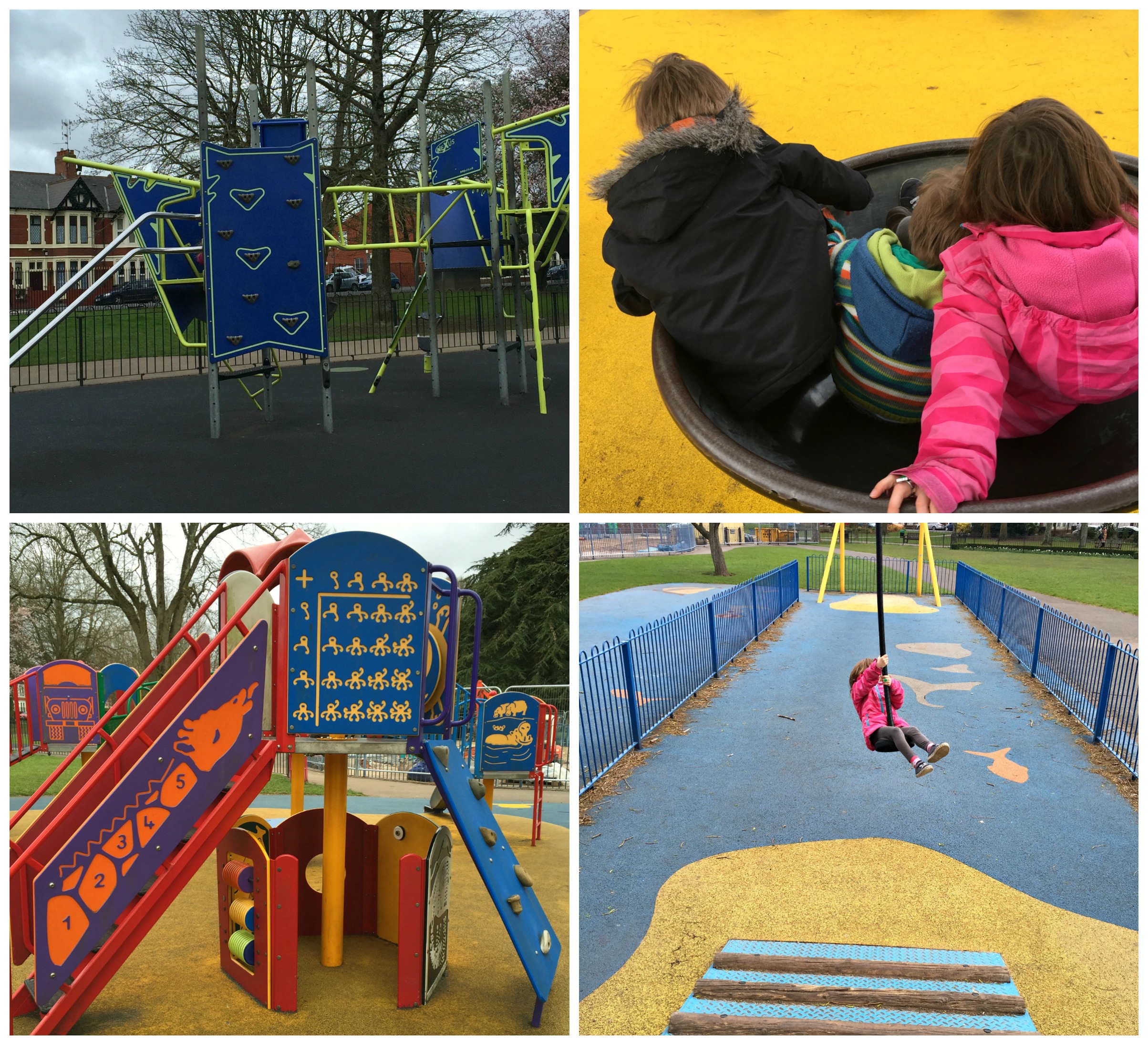 We took a stroll to see the statue of Billy the Seal. The park’s most famous resident, Billy was thought to have been accidentally fished out of the Irish sea and donated to the park’s small zoo in 1912. Billy died in 1939 – when an autopsy discovered Billy was in fact female. Billy’s skeleton is currently on display at the National Museum Cardiff.

All three of my children loved running round and putting on a little show for me in the band stand. Built in 1988 to celebrate the park’s centenary, it is based on the Victorian original, which had fallen into disrepair and been demolished. 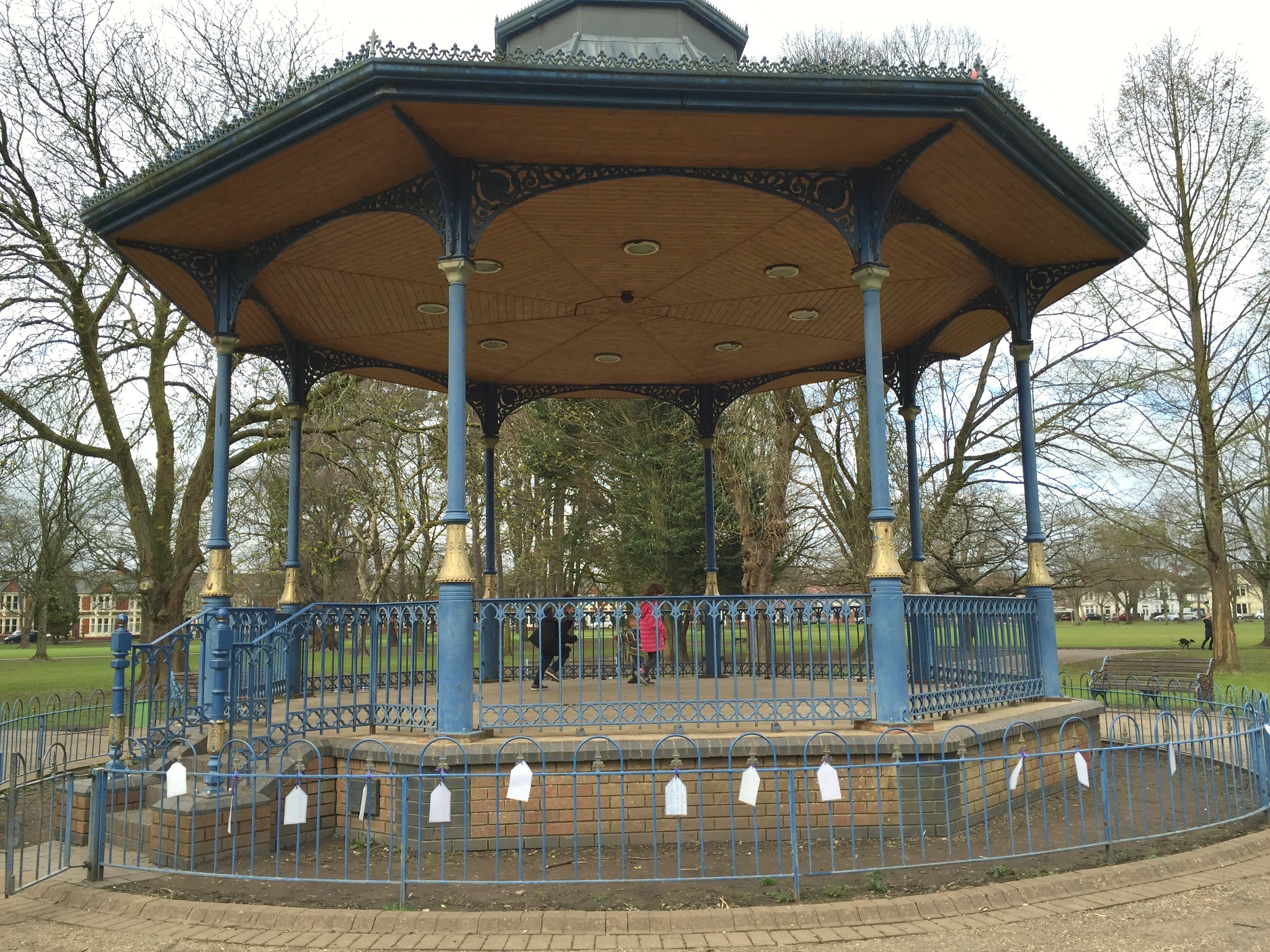 We didn’t bring bikes and scooters today, but the numerous long, flat paths across the park are great for children to wheel around on, especially on such a quiet day. There’s also toilet and baby change facilities, a refreshment kiosk and sports courts. 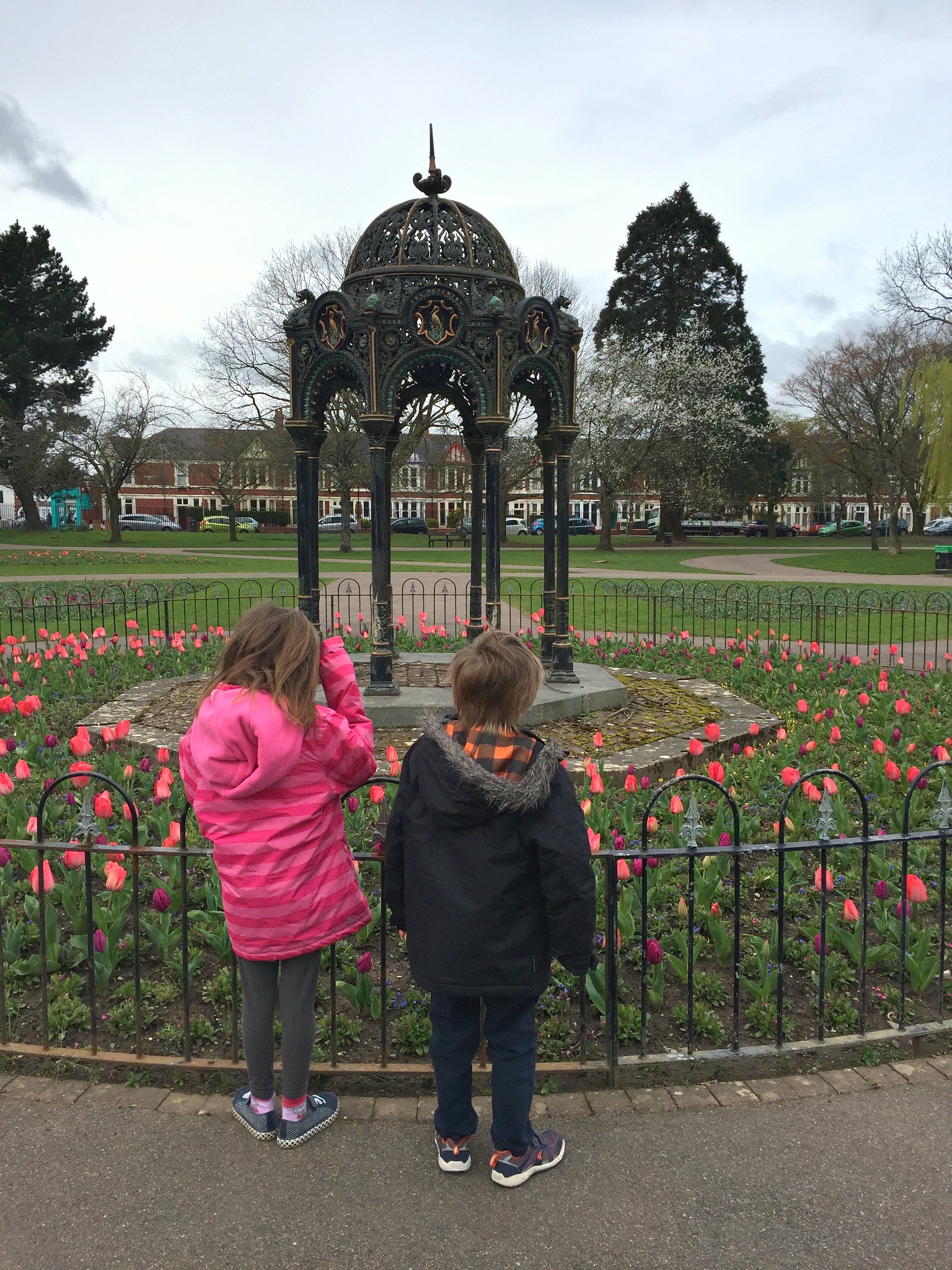 After just over an hour in the park, we headed across the road for pancakes at La Creperie de Claudie on Cowbridge Road East.

I’d like to reassure you that my children don’t usually have chocolate-filled crepes for their lunch – but if you can’t have a sugar-laden dish for lunch when you’re on your Easter holidays from school, when can you? 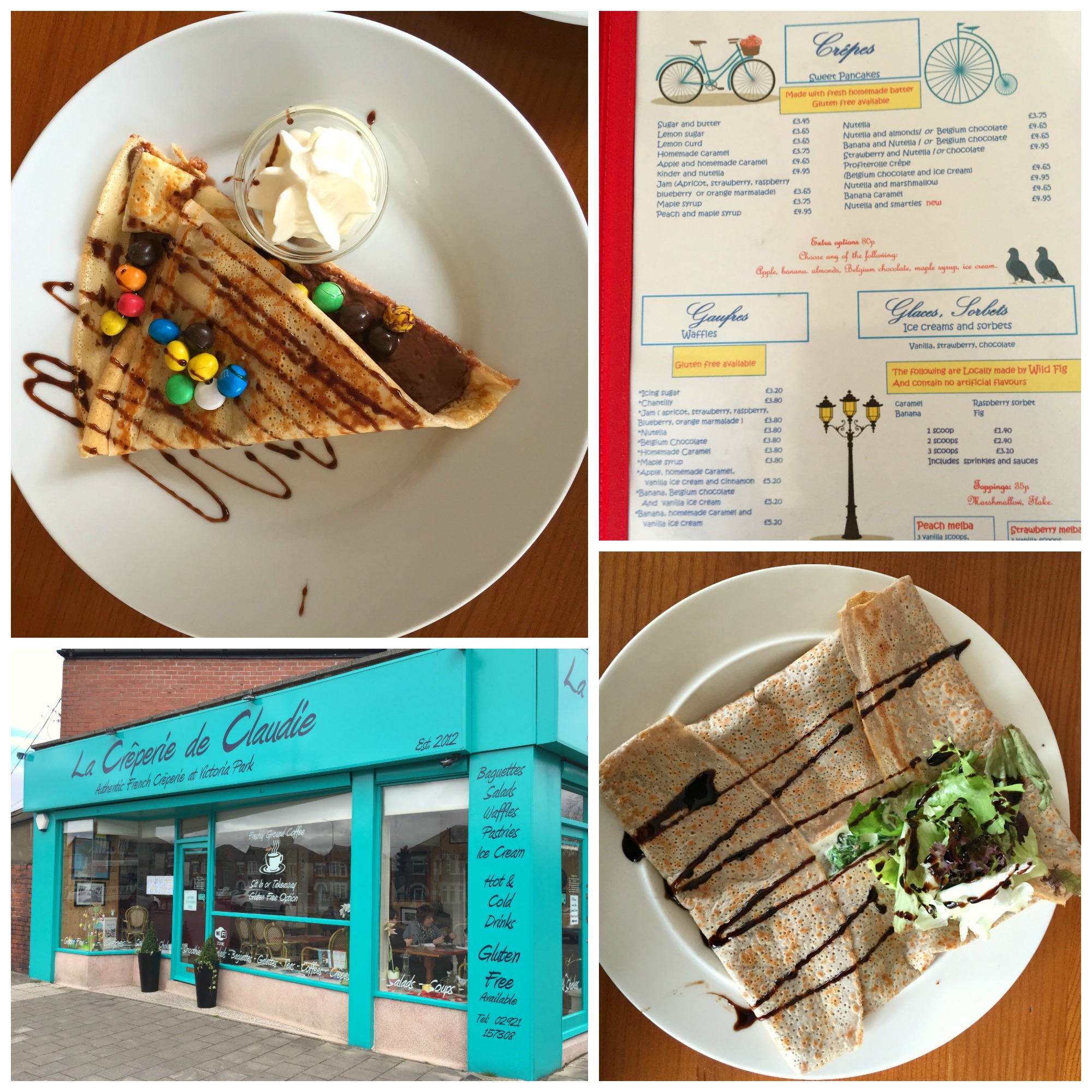 We were served by Claudie herself, a charming and helpful French woman from Brittany. The shop had a lovely casual atmosphere, with high chairs available as well as story books and colouring sheets and pencils for the youngsters.

The adult-sized crepes cost around £5 each, but Claudie made up children’s sized ones for each of my three for £3 each. I read the list of fillings to them and the undoubted winner was crepes with Nutella and Smarties, so that’s what we went with. The generous-sized pancakes arrived really quickly with chocolate M&Ms on them rather than Smarties – although I don’t think my children minded in the slightest – and a side portion of cream.

I opted for a healthier spinach and cheese savoury crepe. Served with salad, it was delicious and really filling.

After finishing our lunch, we headed back to the park for another half hour – I was keen for my children to burn off some of that sugar energy – the perfect end to a lovely morning in Canton. 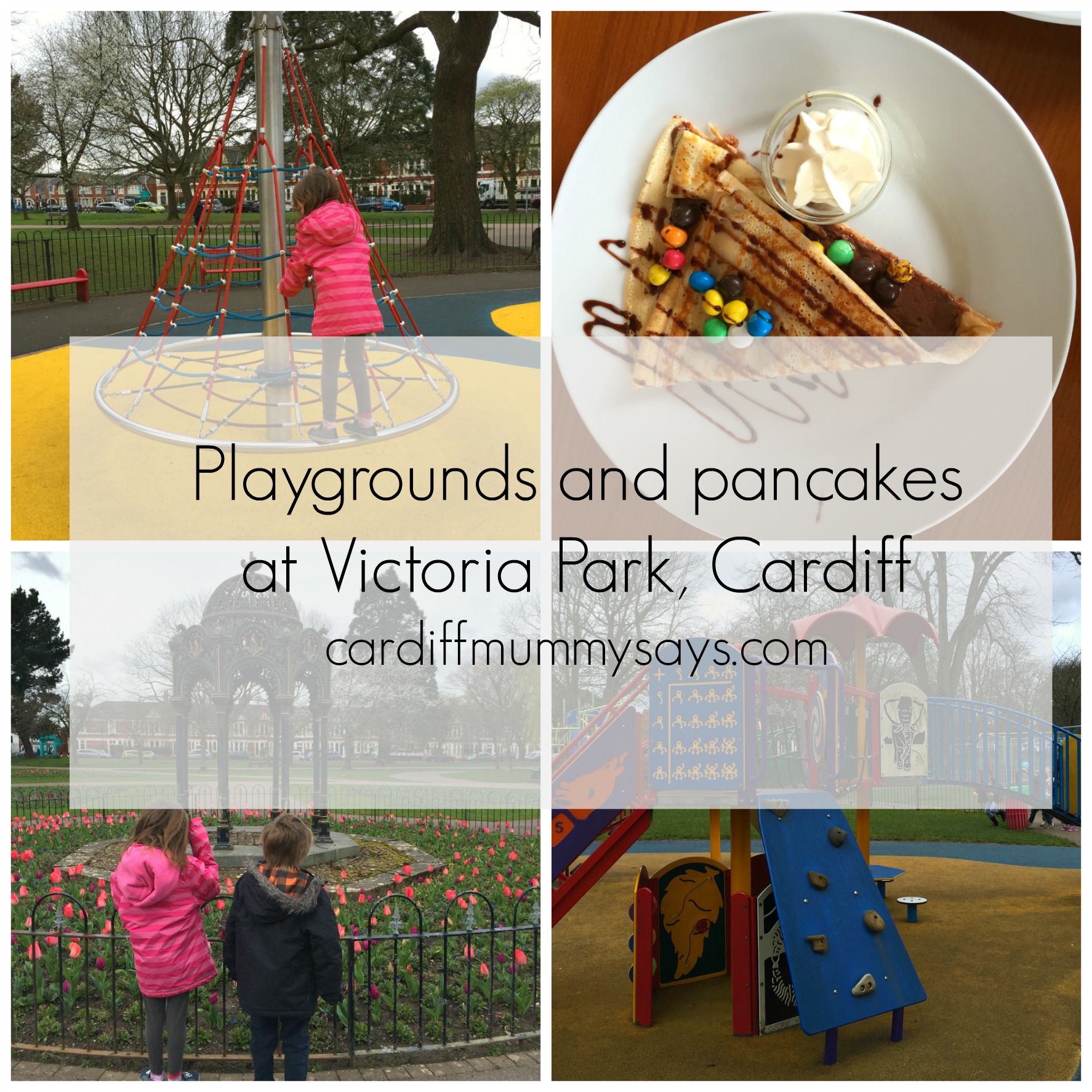 Have you been to Victoria Park or La Creperie De Claudie? Do let me know in the comments section below, by tweeting me on @cardiffmummy or joining in the chat on the Cardiff Mummy Says Facebook page.

*La Creperie De Claudie did not know we would be reviewing them and we paid for our pancakes in full.

2 Comments to Playgrounds and pancakes at Victoria Park, Cardiff