When Toddler managed to climb out of his cot a few months ago, we knew that meant it was time for him to move to a big bed.

Until that point, we hadn’t been in a rush to move him from cot to bed. He’s a good sleeper – we definitely didn’t want to jeopardise that! He was also a real wriggler and we’d often find him upside down at the other end of the cot, or lying width ways side to side rather than top to bottom. We thought if he went into a bed, he’d spend half the night falling out…. and we’d spend half the night getting out of bed ourselves to help him.

But, like I said, his little climbing adventure made us worry about his safety, and so the bars came off his cot that very day.

The Gro Company had kindly sent us their Gro To Bed bedding set to review – and although we had a few initial teething problems, it’s been brilliant. 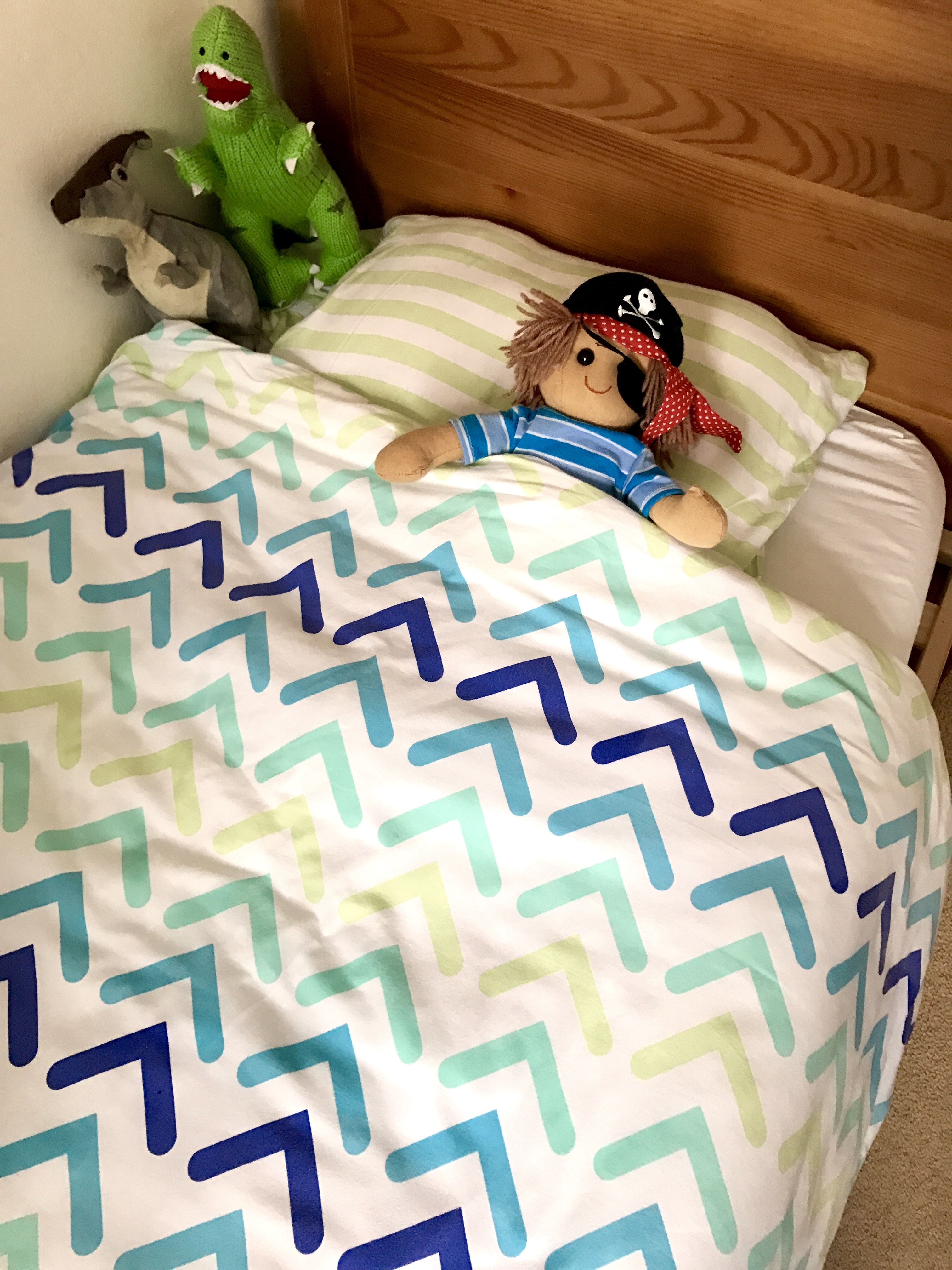 We’ve had Gro Company products before. Their Gro Anywhere black out blinds have been brilliant to stick on windows when we’ve been away and the Gro Clock has been great at keeping my eldest two in bed in the morning. And of course, they revolutionised baby bedding with their multi-award winning Gro Bags, with sleeping bags now the norm for infants. I know they’re a brand I can trust.

The Gro To Bed is like a giant sleeping bag, keeping your child in place in their bed and preventing them from falling out when they move into their first proper bed. They have several styles available, some gender neutral and some more typically gender specific. We opted for the Racing Ahead style as it was in keeping with the existing colour scheme in Toddler’s bedroom.

The bedding consists of a fitted sheet, with a sewn-on pillow case, and a duvet cover attached by zips. You can buy extra sheets. You’ll also need to buy your own pillow and duvet to fit inside – Gro do make their own, although they’re quite pricy. Luckily, we’d inherited a hand-me-down quilt ad pillow and it fitted fine.

When I first saw the photos, I had visions of my toddler wriggling down inside the bag, getting stuck and over-heating. So I was pleased to see learn that the zips are just a small section of the side with the bottom loose. 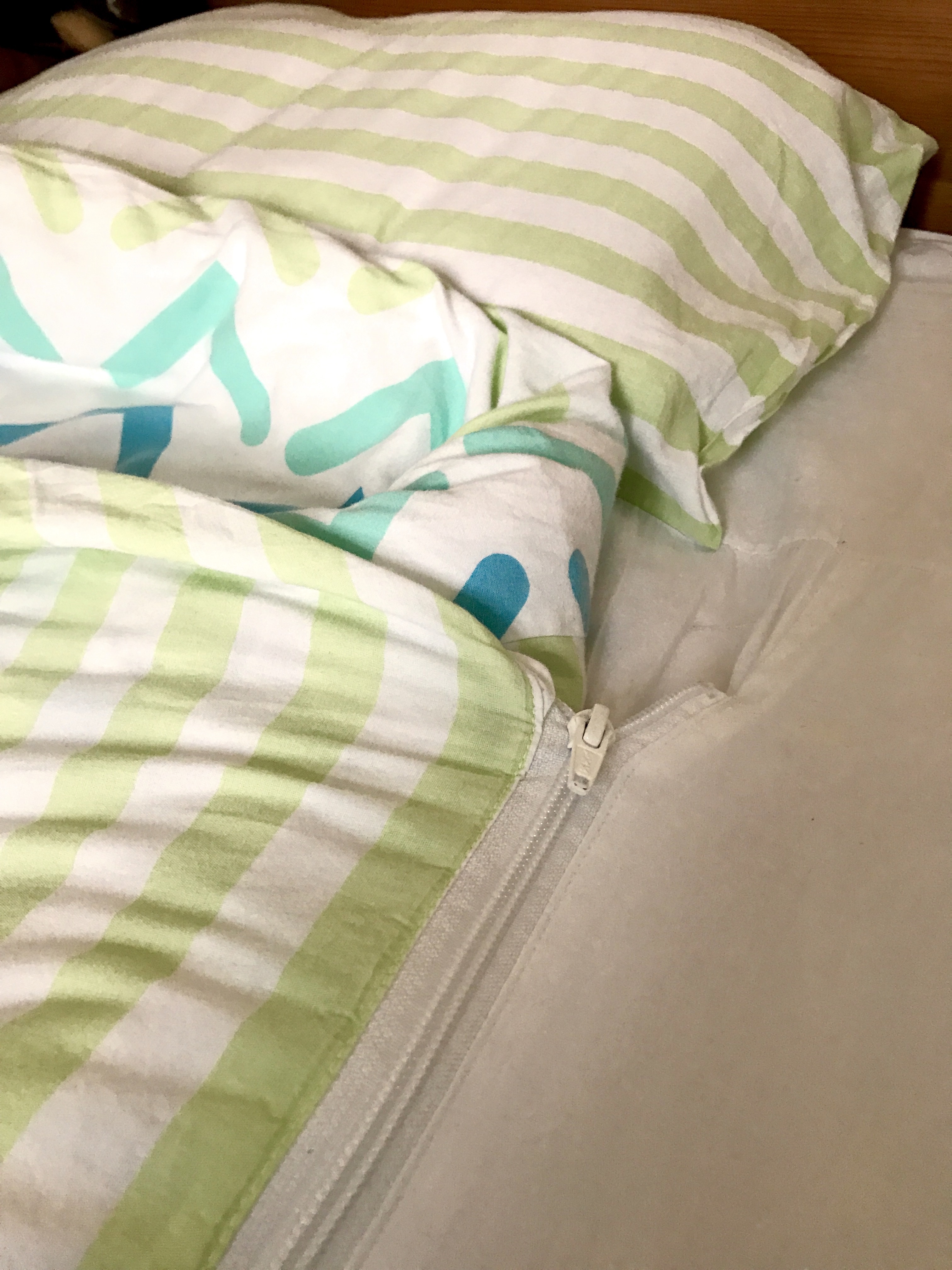 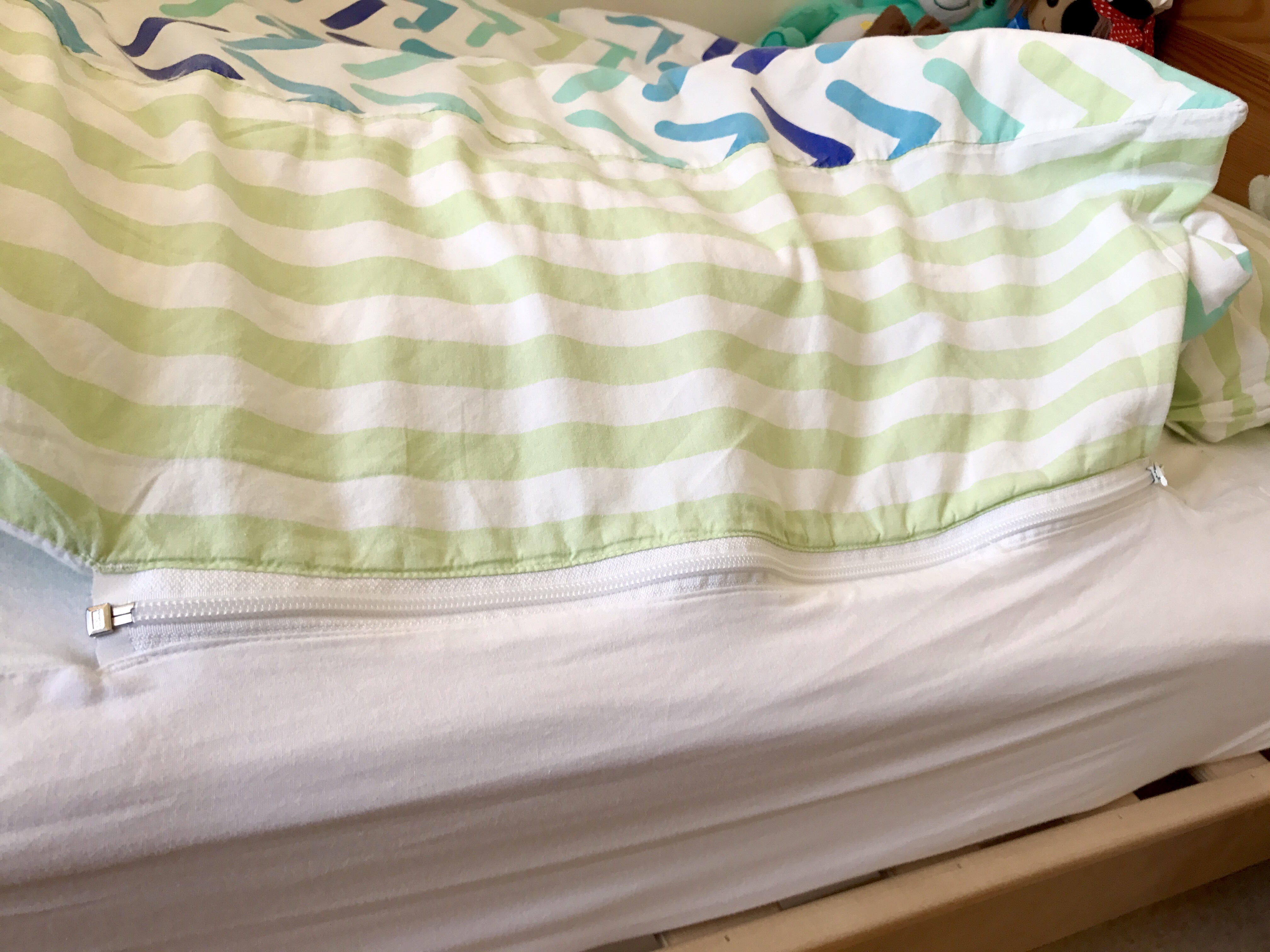 I will be honest and say it took Toddler a little while to come around to the idea of the new bedding. In fact, he hated it at first, was very reluctant to give up his sleeping bags and refused to get into his bed. Typical toddler – resistant to change. We slowly introduced the new bedding over a couple of weeks until he was happy and although we had a rocky start, we’ve been really pleased with it.

The first two nights didn’t go well at all. He fell out of bed a few times. I think this is because he was wriggling up out of the bedding. 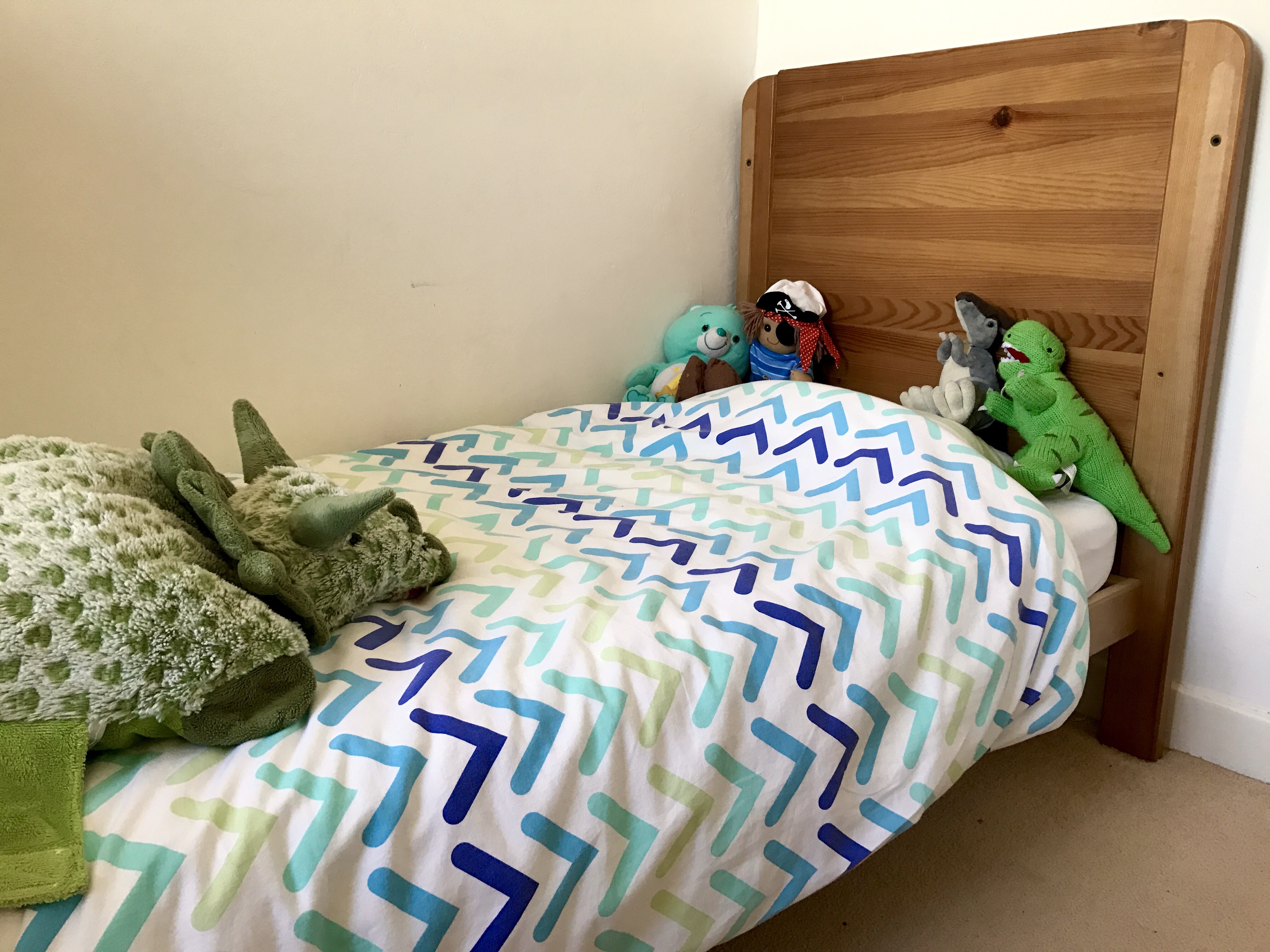 Naturally, I was a bit disappointed to start, but as Cardiff Daddy said to me, imagine how many times he would have fallen out without the bedding. And he had a point! A few times when we had gone in to check on him, he was right at the edge of the bed, only being kept in place by the bedding. So it was definitely doing its job and we persevered.

We’ve been using the bedding for about four months now, and after the initial teething problems, it’s been great. Toddler sleeps all night, hasn’t fallen out for weeks, and is so excited to get into his big boy bed, we don’t even need to ask him.

But in terms of uninterrupted sleep, it’s a good investment, especially if you know it will be used by more than one child.

Visit the Gro Store website for more information and to order.

Have you used Gro to Bed bedding? What did you think? Do let me know on the Cardiff Mummy Says Facebook page, by tweeting me on @cardiffmummy or in the comments below. 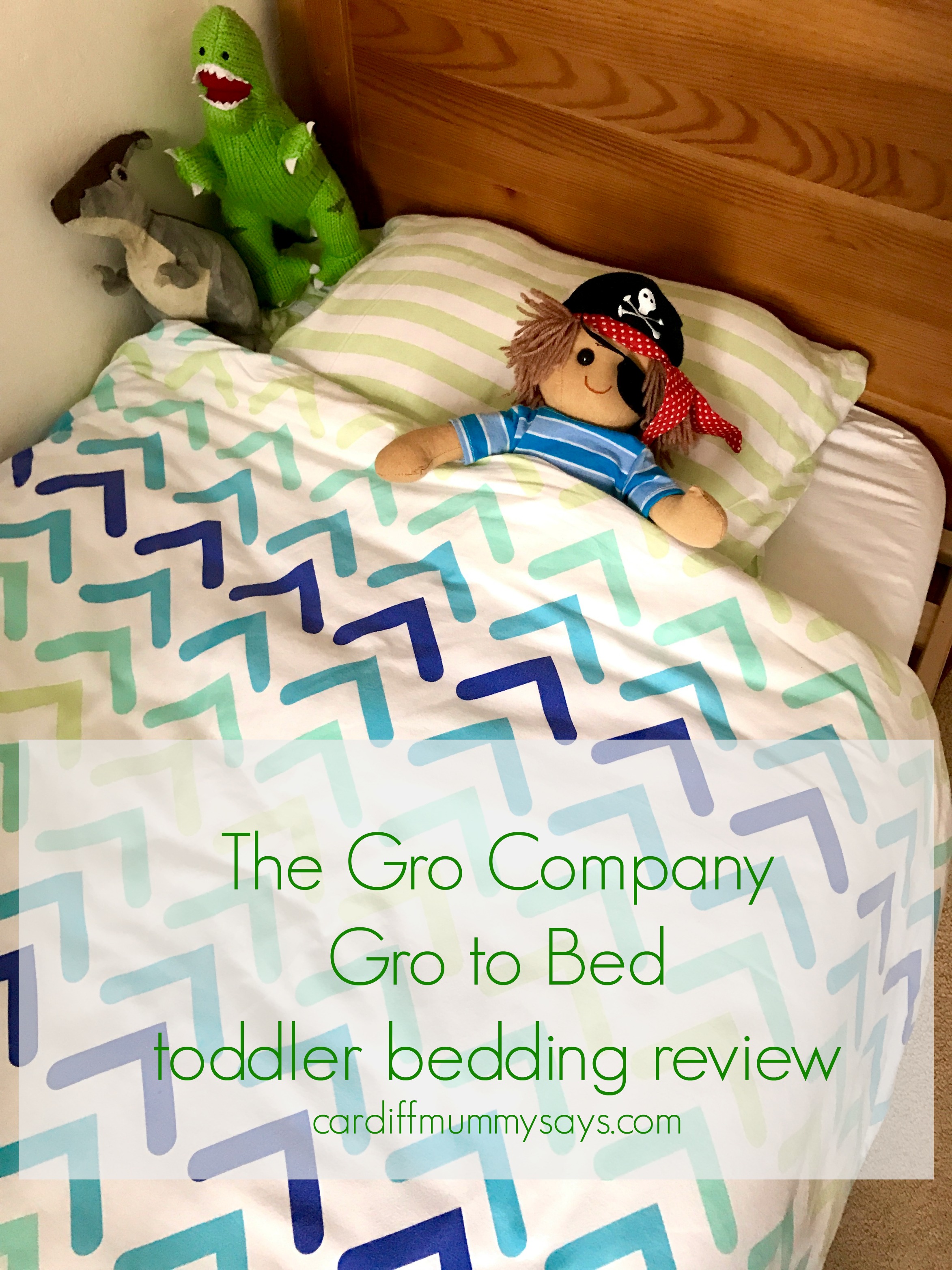 We were sent the Gro to Bed bedding set for the purpose of this review.